The memorials were established to honor those who fought and died during the Japanese Naval and Air Forces attack on Pearl Harbor. They were set up to help preserve the stories and memories of those who served in the Pacific during World War II.

Of the memorials run by the National Park Service in the Pacific, Pearl Harbor is the most popular. The main feature being the USS Arizona Memorial that honors the servicemen who died during the attack in 1941. It, along with other nearby attractions that make it the busiest visitor destination in Hawai’i.

Several parts of the park are scenic sites that are not accessible to the public such as the Mooring Quays, the Five Petty Chief Officer Bungalows, and USS Utah Memorial. You can visit the USS Oklahoma Memorial on tour.

The Pearl Harbor National Memorial is made up of about 21 acres around Pearl Harbor Hawaii. It consists of various landmarks including; Arizona, Utah & Oklahoma Memorials, and the moorings of battleship row as well as bungalows on Ford Island. The area is administered by the park service who provides access to battle locations, historic buildings, exhibits, museums, and monuments dedicated to the people who fought, died, and survived the fighting in the Pacific during World War II.

Outside the national memorial, the Bowfin Submarine, Missouri Battleship, and aviation hangars are popular sites that visitors also enjoy.

The memorials at Pearl Harbor remind visitors of the events of the Japanese attack on the “day that will live in infamy.” The work that the National Park Service and tour guides do make it a wonderful educational experience for all visitors, including those from Japan.

A Complete Pearl Harbor Experience explores the visitor center and promenade, the Arizona Memorial (where the war began for the U.S.),  the Bowfin Submarine, the Pearl Harbor Aviation Hangars (filled with the aircraft of WWII), and the Battleship Missouri Memorial (the Japanese Forces surrendered on her deck in August of 1945, officially ending the war). 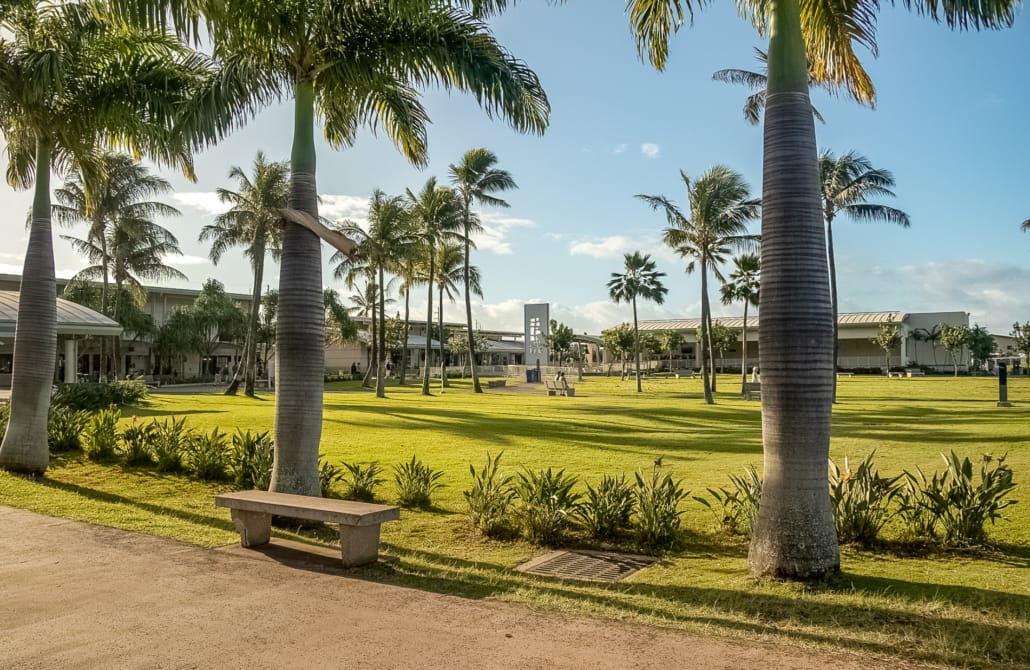 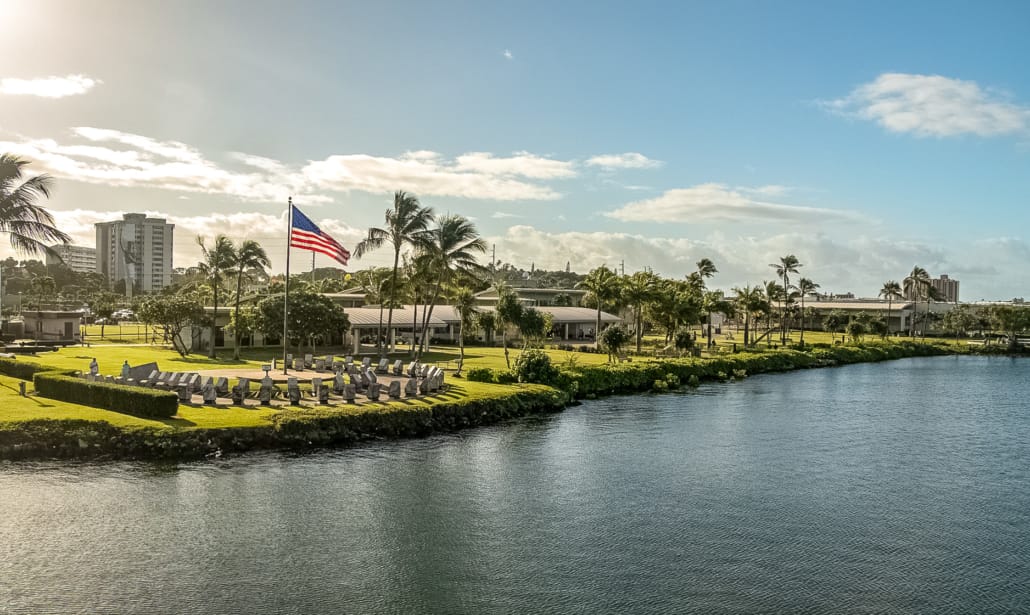 The Pearl Harbor Visitor Center has two world-class museums as well as interpretive exhibits running along the harbor shoreline. This walkway encompasses multiple signs, plaques, and tributes such as Remembrance Circle, a monument listing the names of all Medal of Honor recipients in WWII.

The museums and outdoor exhibits are free and can be visited at anytime the park is open. A $1 / person reservation fee is required to take part in the Arizona Memorial Program which includes a short film in the theatre and a Navy boat ride out to USS Arizona.

For a nominal fee, there are several options to get the most out of your visit. A self-guided audio tour (in 7 different languages) is 2 hours long and guides you through the exhibits and outdoor promenade to 29 important locations throughout center. 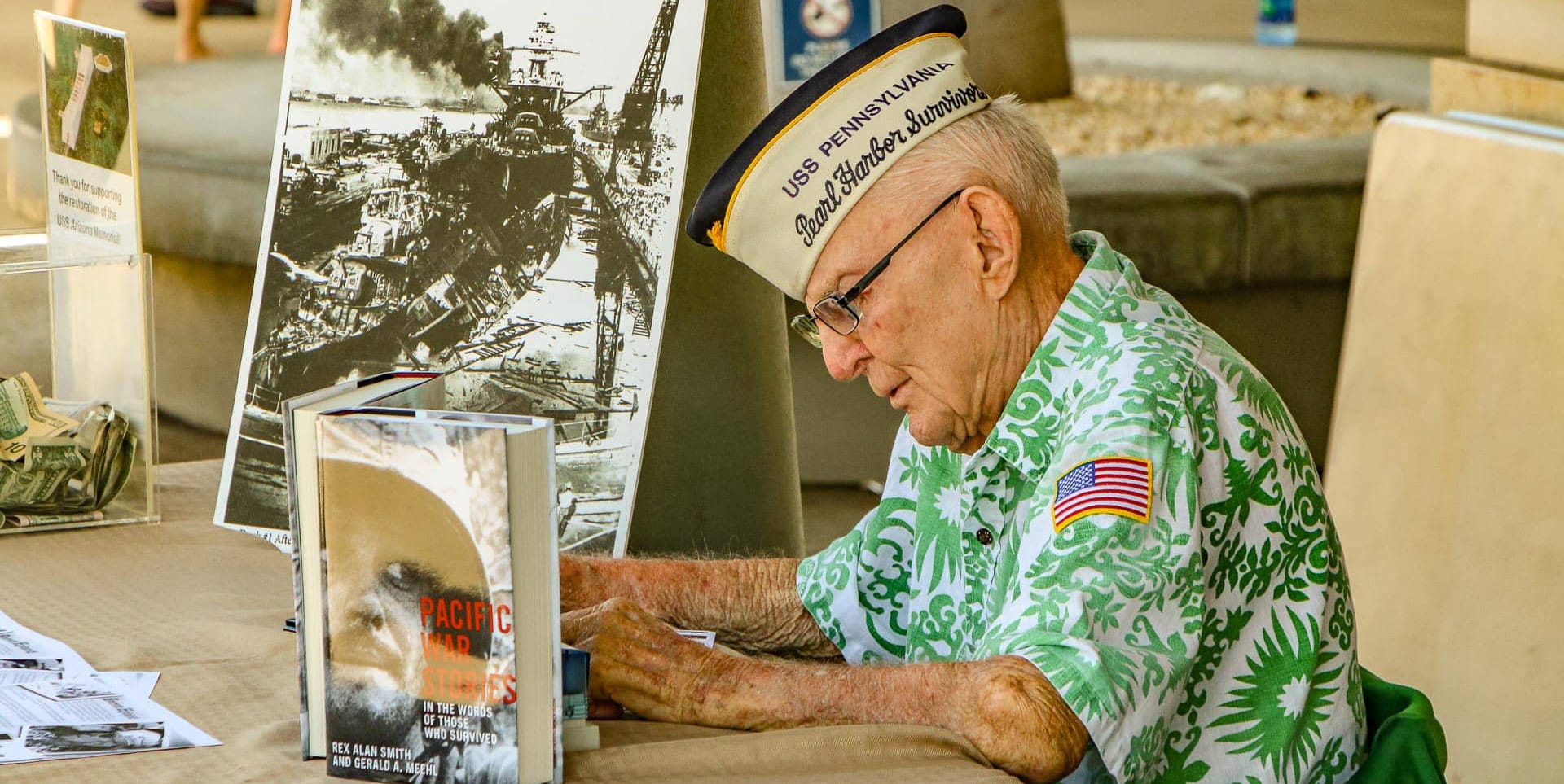 At the visitors center, guests can explore two museums that tell the story of Pearl Harbor and America before, during and after the attack. The “Road to War” exhibit includes artifacts, historic newsreel footage and photos of American life before the war. The “Oahu 1941” open air gallery explores the thoughts and feelings of native Hawaiians and the people living on Oahu during the 1940s.

The “Attack and Aftermath” exhibit showcases film and oral histories, artifacts and photos of the attack and how it propelled the United States into war. This exhibit also features scaled-down models of the Arizona Memorial and wreckage, a Japanese “Kate” bomber and the only recovered WW2 Japanese torpedo. These are just some of the interesting items on display.

Visitors may also get a chance to meet veterans who are present on most days. They are happy to share their stories and sign autographs with guests. A bookstore and a gift shop as well as a convenience store round out the amenities at this expansive National Memorial. 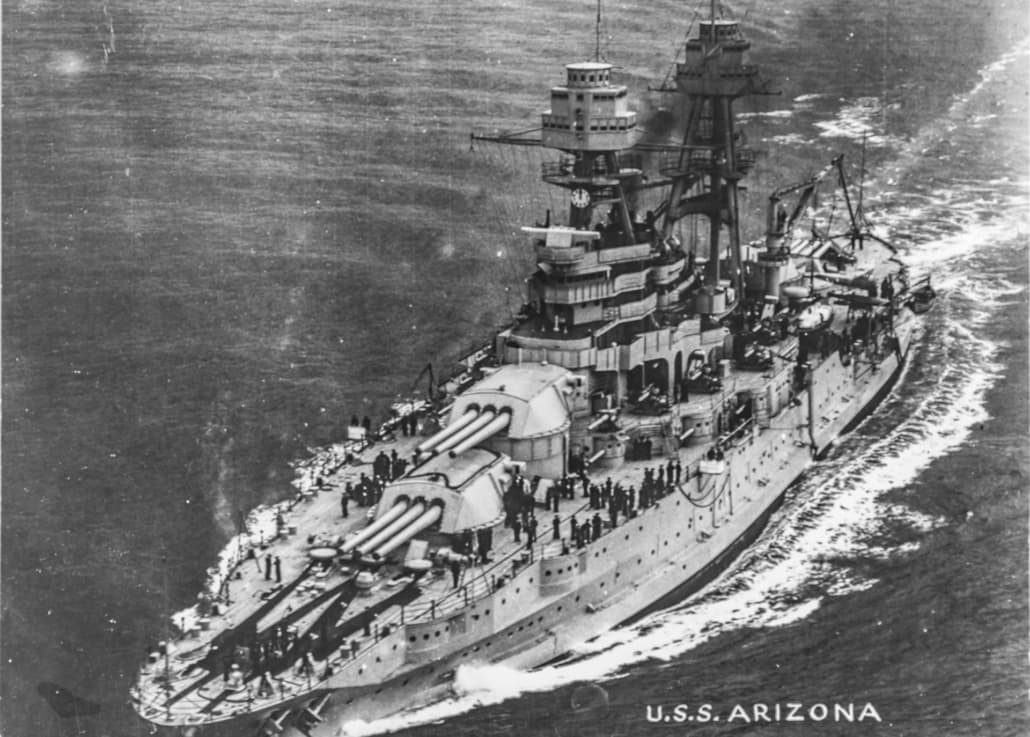 A new addition to the visitor center is the Virtual Reality Center. For less than $5 VR goggles enable visitors a 360 degree perspective of the USS Arizona battleship, the attack on Pearl Harbor and the Arizona Memorial today.

The tour starts on the deck of the USS Arizona before the attack. Next guests can see first-hand the battleships lined up and witness the attack. Finally, the tour takes you inside, around and over the Arizona Memorial. It’s a step back in time where you can see history first hand in this detailed virtual tour! All equipment is provided and easy to use. 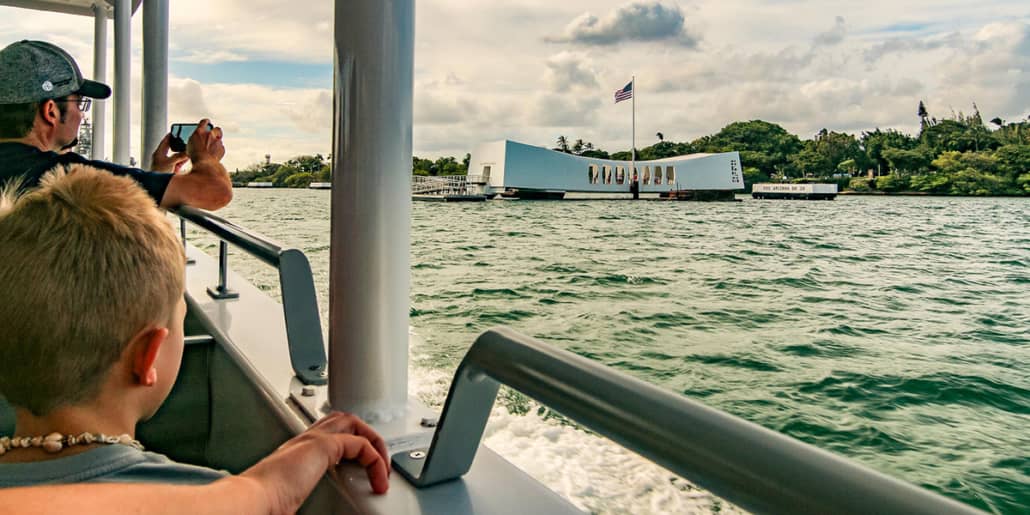 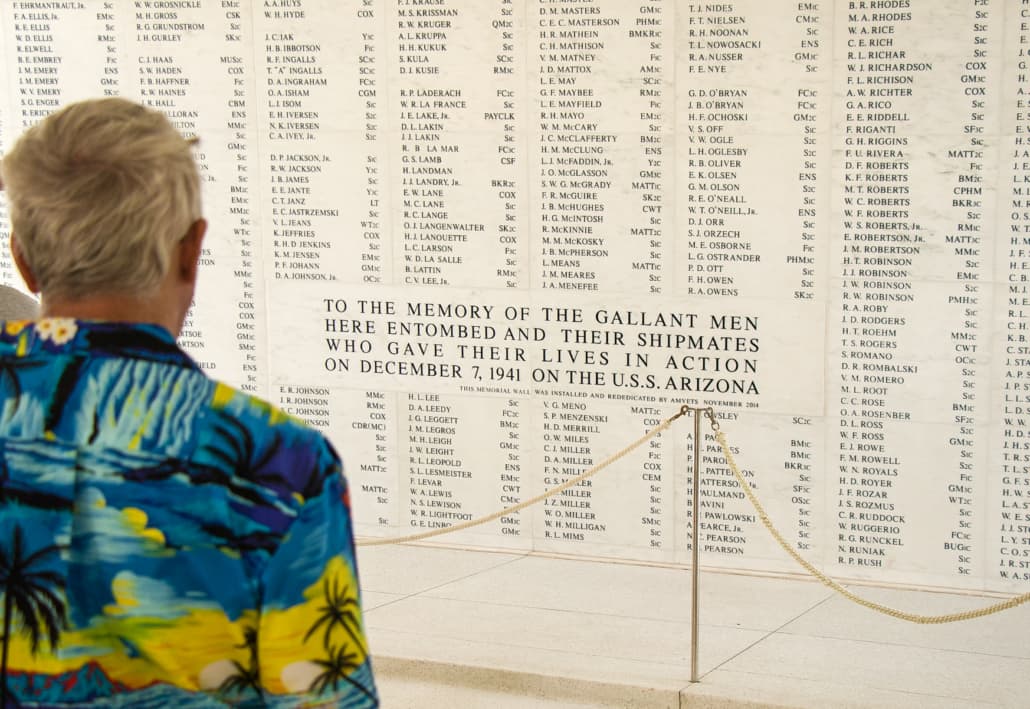 The most iconic part of the national memorial is the Arizona Memorial. Built-in 1962, the design represents America’s entry into WWII and is a sober reminder of the lives lost on December 7th, 1941. The horrific attack changed the world not just for the United States but for the thousands of Americans who died and the nearly 1.5 million Japanese that perished in the fighting across the Pacific and Asia. Over 1 million visitors a year venture out to see this monument and the ship that lies beneath it.

A film in the theater at the visitor center starts the Arizona Memorial program. A 23 minute documentary of the attack is viewed before visitors proceed to the boat that will take them out to the wreck. It is a solemn tribute to the 1,177 men lost on Arizona during the attack which accounted for about half the lives lost that day. 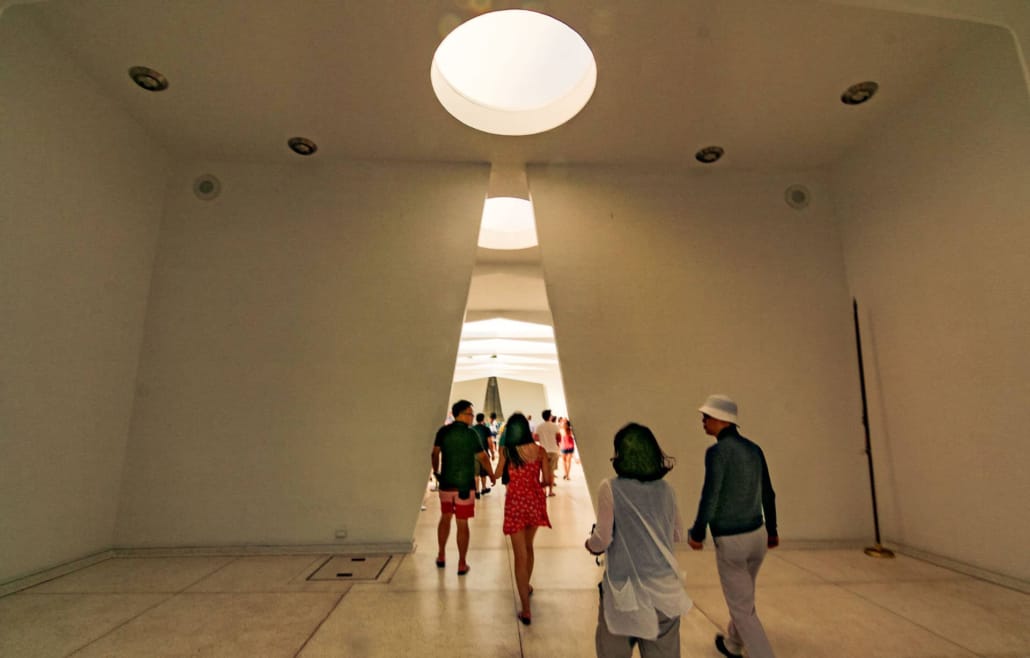 Located Near The National Memorial

Ships, Submarines & Airplanes Should Be Part Of Your Experience 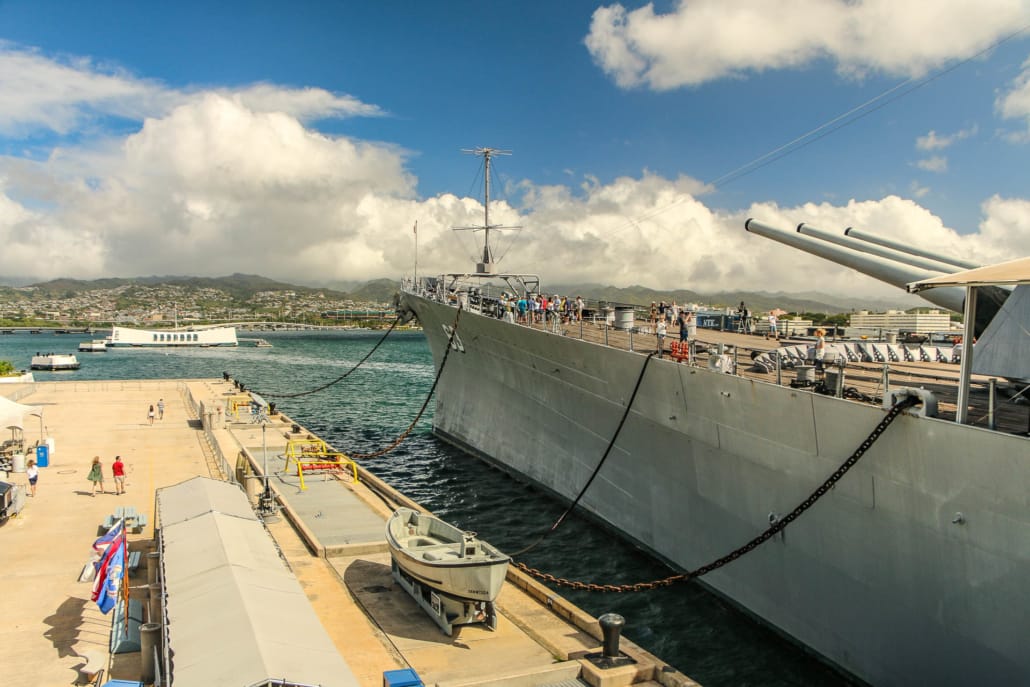 The Iowa-Class Battleship USS Missouri has incredible historical significance and itʻs place at Pearl Harbor is held in high esteem. On her decks, the official documents, ending World War II with Japan were signed. This amazing ship is open for exploration, inside and out. Go stories above the main deck or down into the living quarters, there is simply a lot to see in this huge ship.

Like USS Arizona, this ship was made for battle and itʻs massive guns dominated. 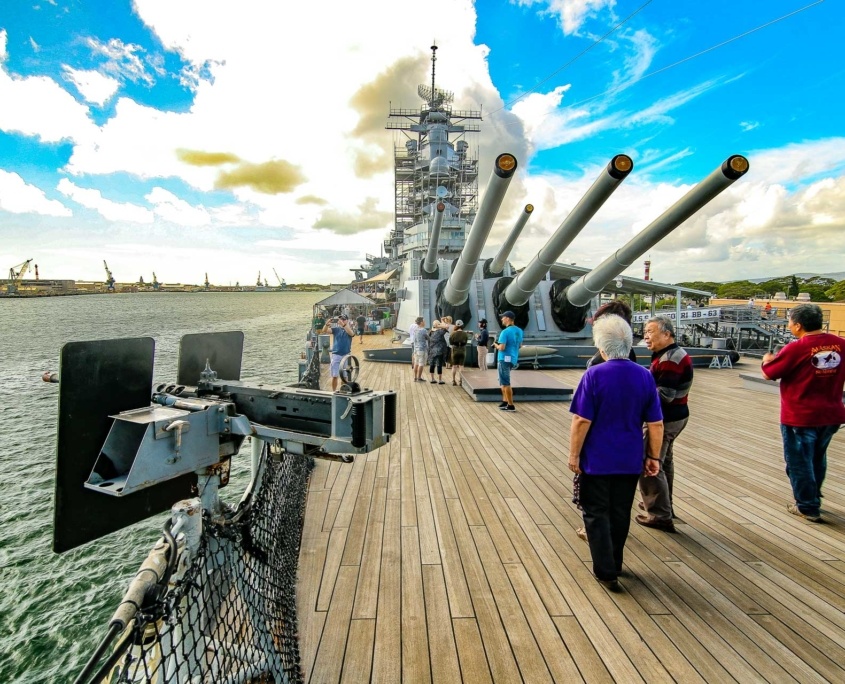 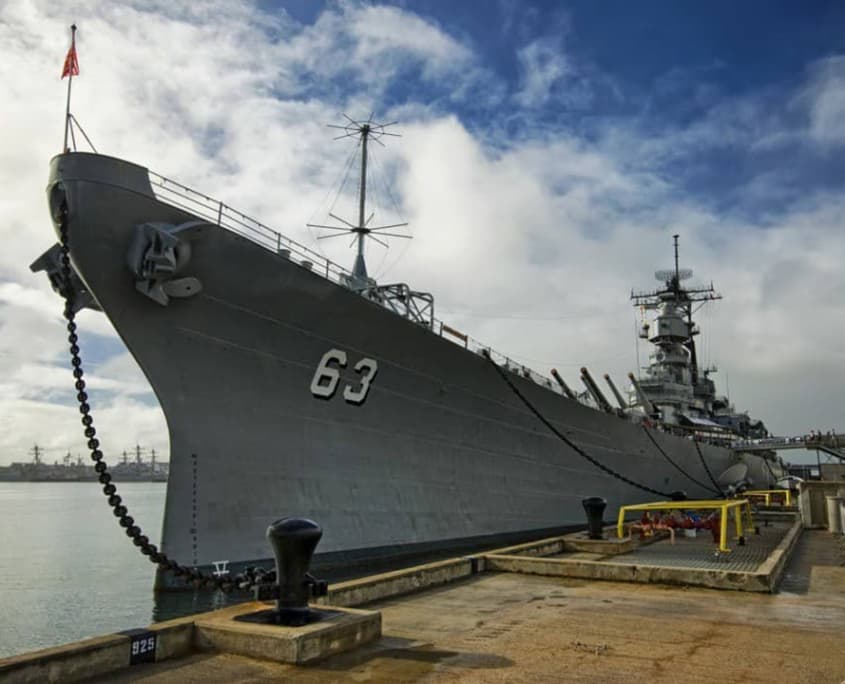 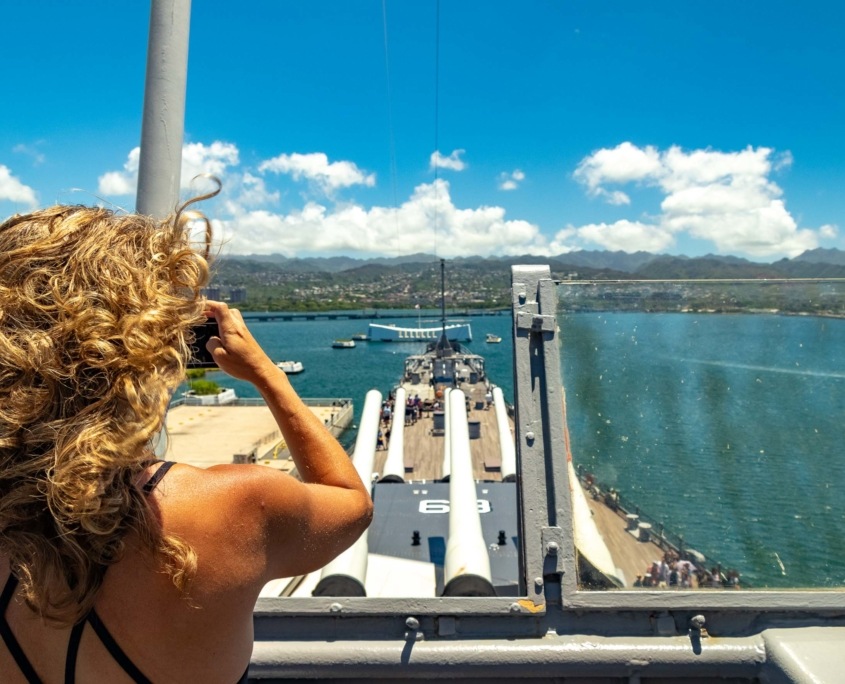 The WWII vessel stands as a tribute to the unsung heroes of the Pacific Submarine Fleet. The USS Bowfin is berthed in front of the Submariners Museum adjacent to the visitor center.

A highly decorated wartime vessel, the Bowfin is a fascinating look into the “Silent Service” of WWII that brought the fight to the Japanese while the badly damaged Pacific fleet was being rebuilt after the attack. Nicknamed the “Pearl Harbor Avenger” when it was launched on December 7th, 1942,  Bowfin is credited with sinking 44 major ships on nine war patrols in the Pacific during the war.

Gain access onto and inside the submarine. Take a self-guided audio tour and enter “The History of Undersea Warfare” exhibits too. 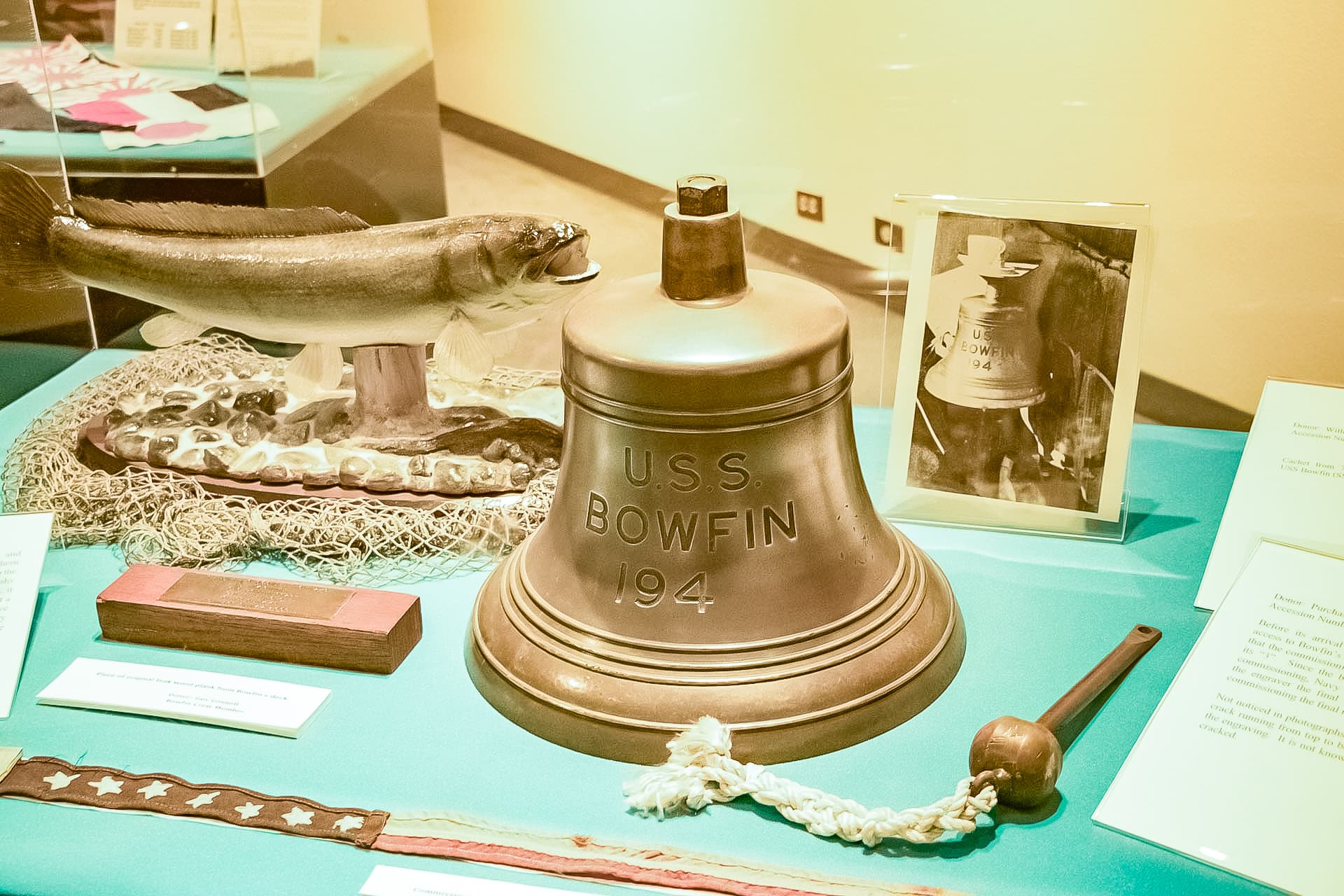 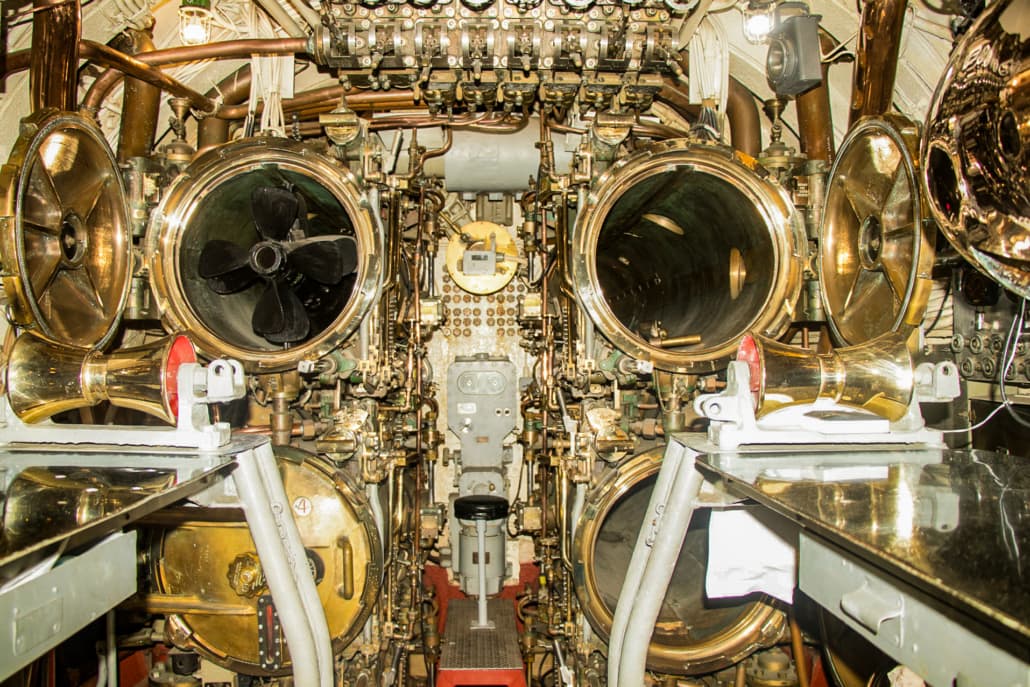 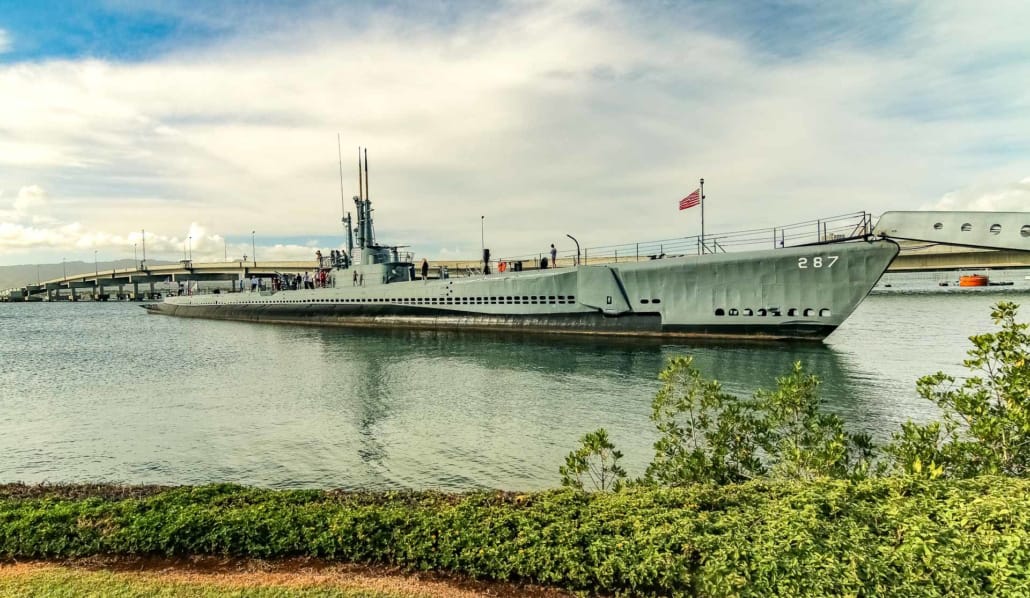 Located on Ford Island along with the USS Missouri battleship and housed within two large hangars that sustained damage during the attack, is the Pearl Harbor Aviation Museum. The hangars exhibit the aircraft that played an essential role in winning the war in the Pacific as well as many others since then.

The attack at Pearl Harbor, as well as several important battles in the Pacific, are featured prominently. Large murals and a diorama show the strategy involved in winning these decisive battles such as the Battle of Midway.

Legendary aircraft such as the P-40 Warhawk (Flying Tigers), the carrier-based Grumman Wildcat, the SBD Dauntless dive bomber the B-24 Bomber are just a few of the aircraft featured in Hangar 37. Hangar 79 is filled with the jet aircraft of the Korean and Cold War while on the outside tarmac a vast lineup of military helicopters await inspection. This hangar is also a restoration workshop that currently displays a B-17 Flying Fortress recovered recently near Saipan.

Flight simulators and games in the Raytheon dome, as well as a sit-down air-conditioned restaurant make for a fantastic experience. 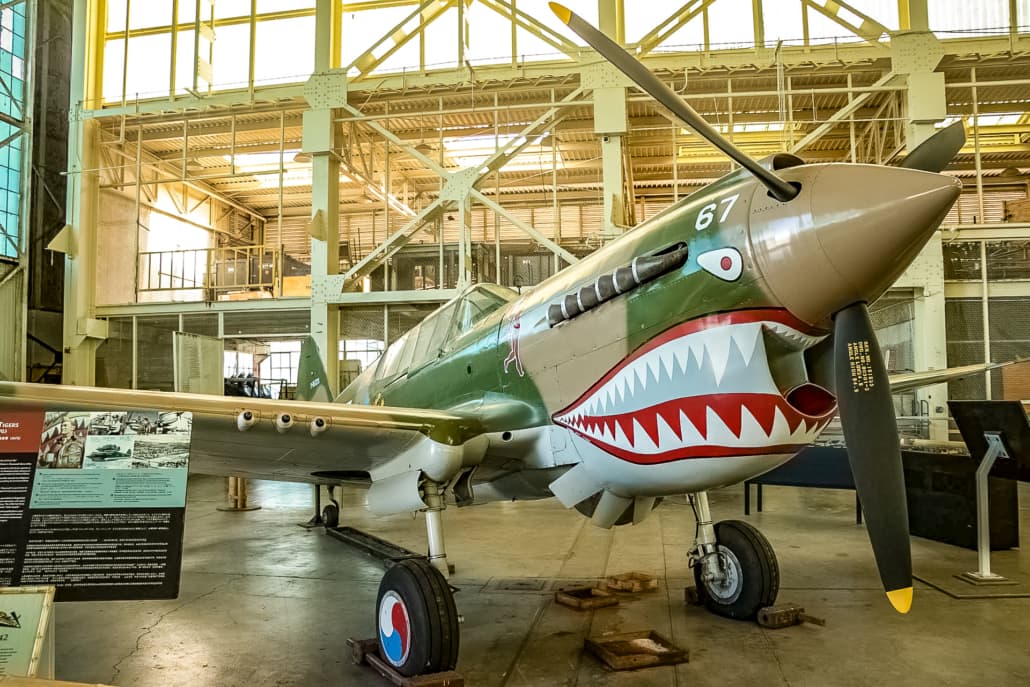 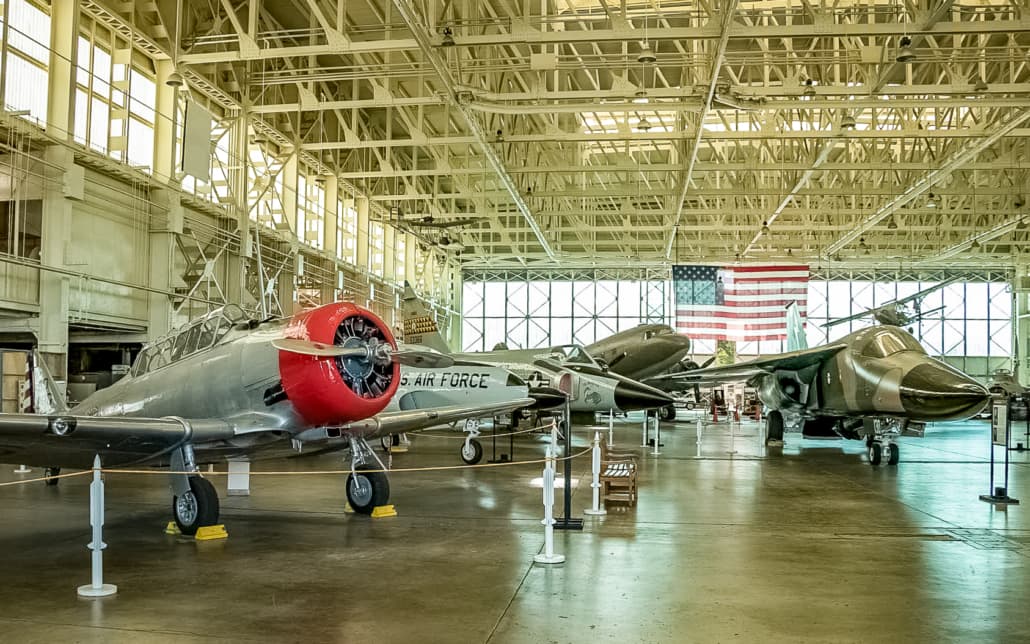 Create Great Memories During Your Visit

There are a lot of great tours we offer to help you experience Pearl Harbor (Pearl Harbour, Hawaii for our English and Canadian guests) the way you want to. All our small-group tours are provided in Mercedes Sprinter vans that carry a maximum of 12 passengers and less-expensive, large group tours in mini-buses or double-deckers. Come explore the island of Oahu with the local experts.

We are here to make your visit to Pearl Harbor easy. Our free cancellation policy is good up to 48-hours before the tour starts (except on flights and self-guided experiences).