Located Along Battleship Row Near Arizona

Located on Ford Island and in line with the Arizona Memorial along battleship row, the USS Battleship Missouri towers over its dock some four stories high. It is accessible only by shuttle from the Pearl Harbor Visitor Center. Ford Island is a military installation and the shuttle service is the only way to get to this museum

When you arrive at the massive naval vessel the entrance walkway is lined with American flags and a stoic statue of Admiral Chester Nimitz greets visitors. The sheer size of the ship becomes apparent as you climb the gangway. The Arizona Memorial can be seen to the left off the front bow, giving visitors an idea of the size of the USS Arizona resting beneath the surface. Once on board the massive array of gun barrels that tower over the deck is just the beginning of a glimpse into what it was like to be at war in the 1940’s. 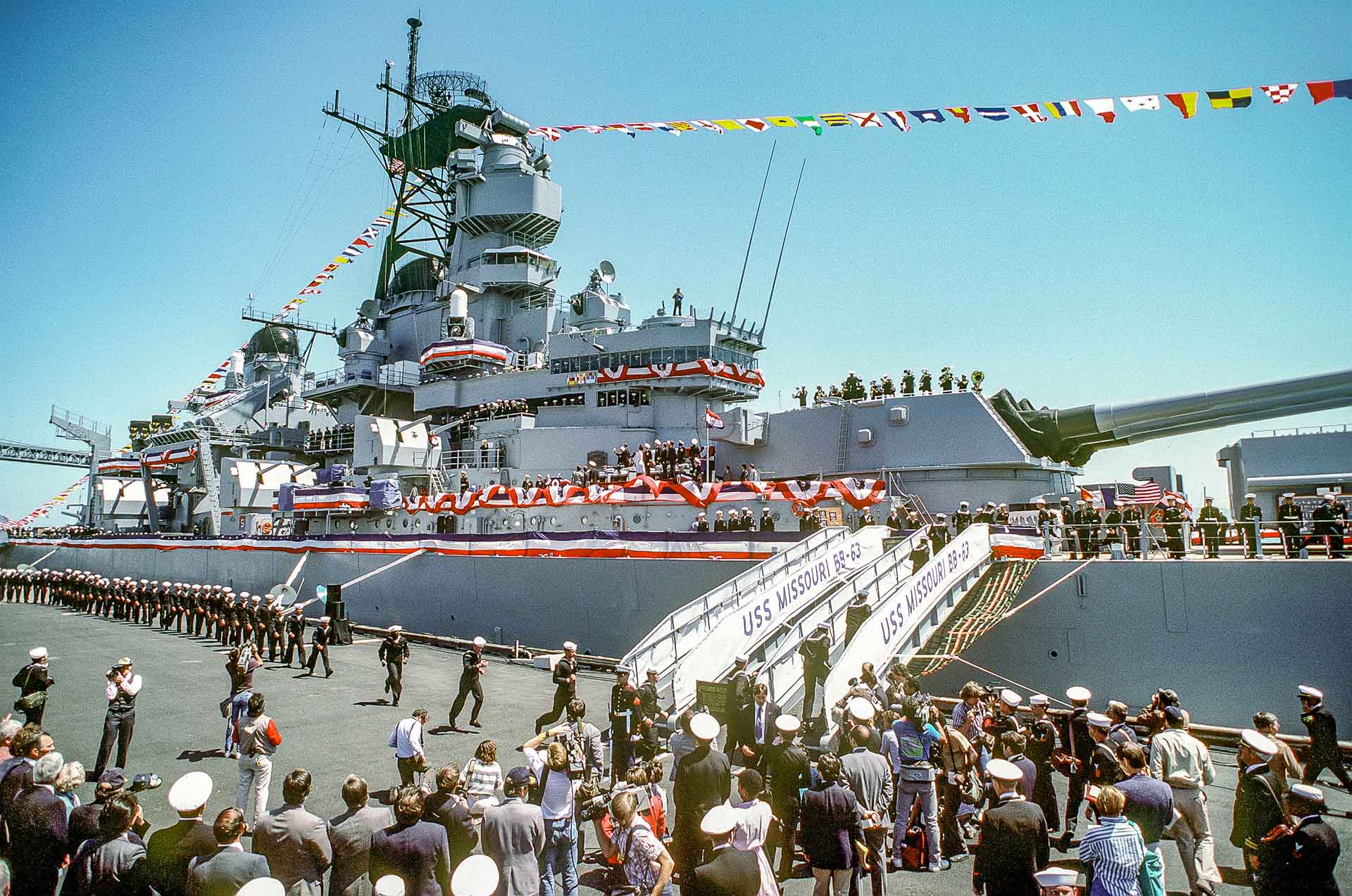 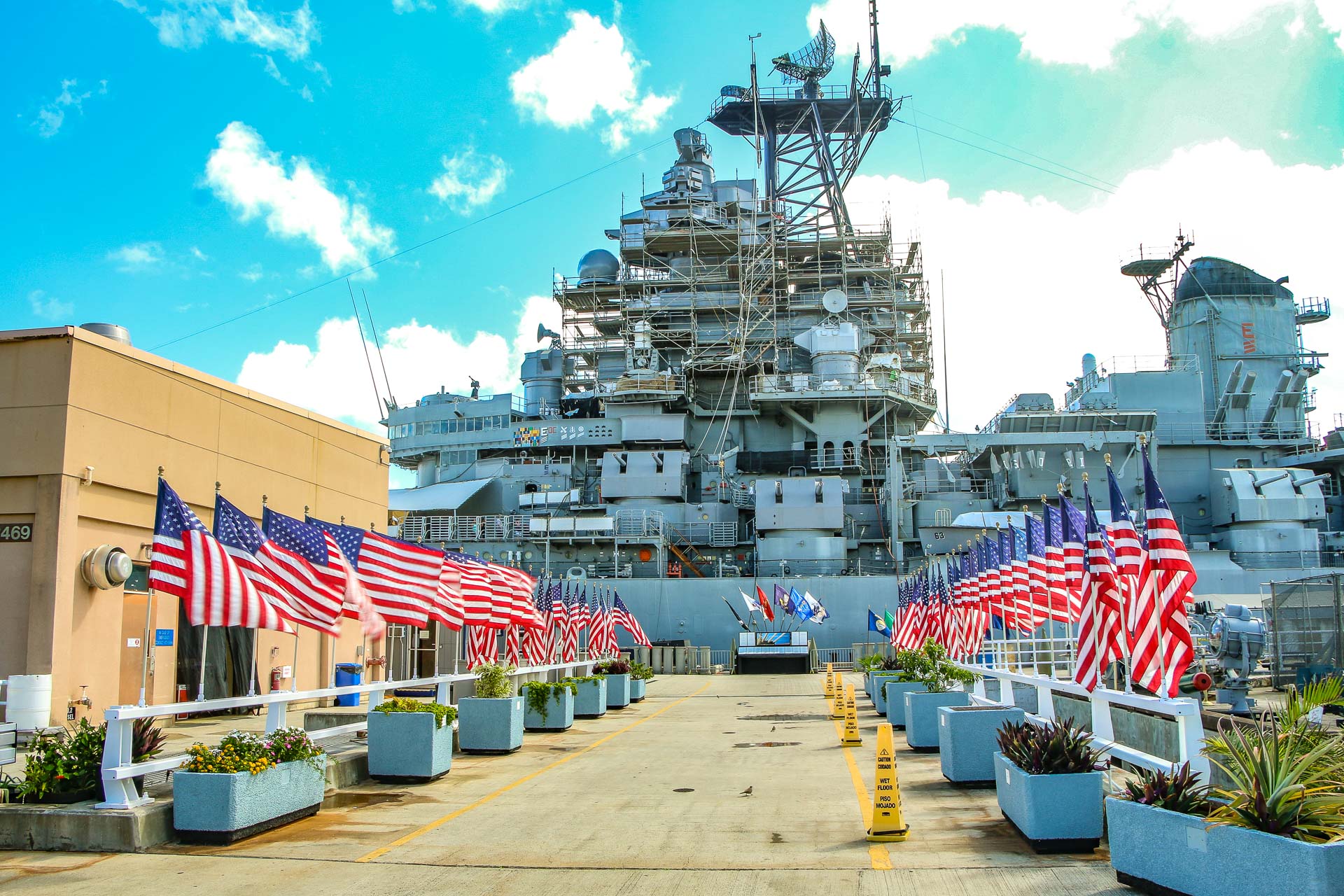 Tours That Include A Stop At The USS Battleship Missouri Museum

History Of The USS Missouri 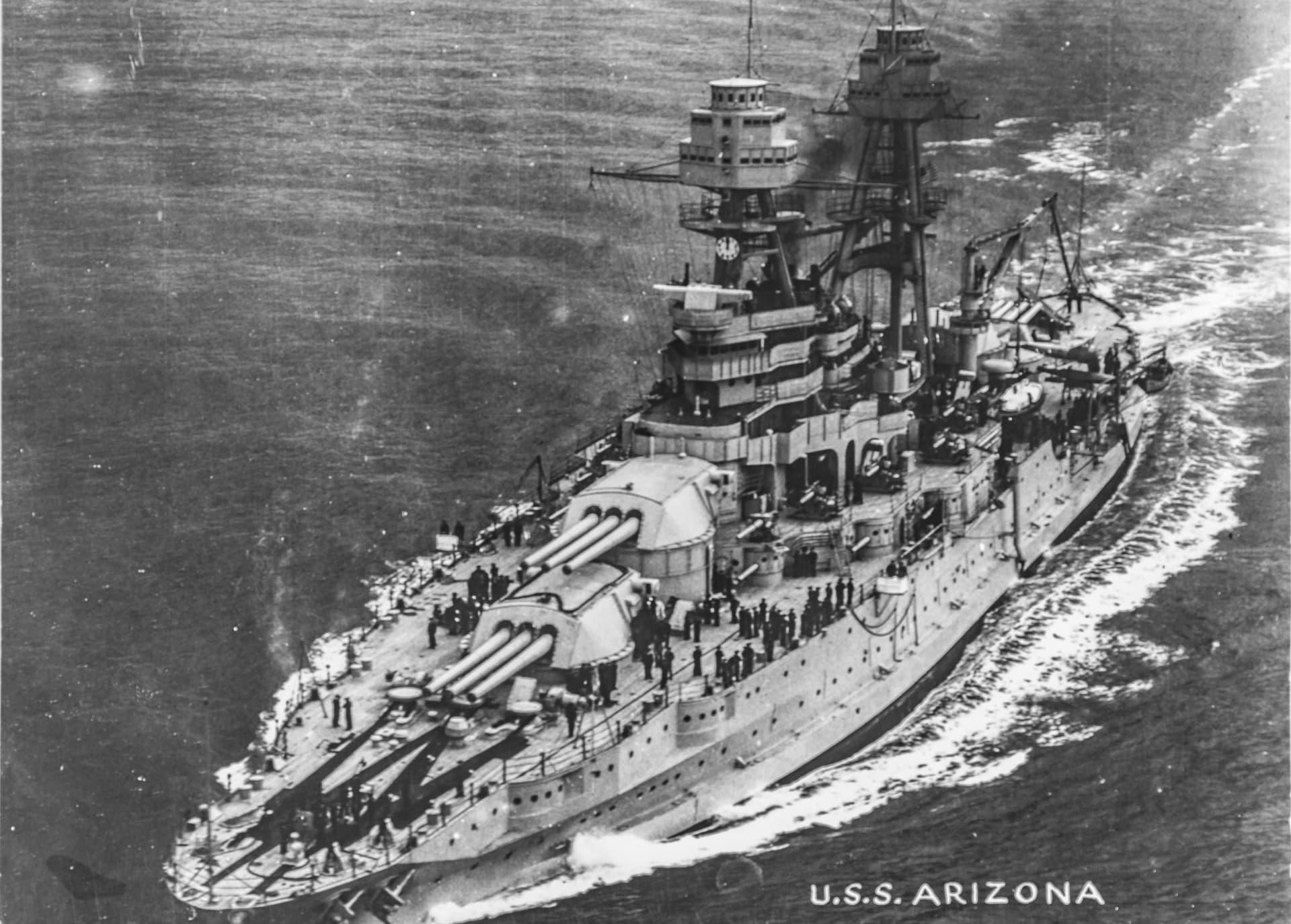 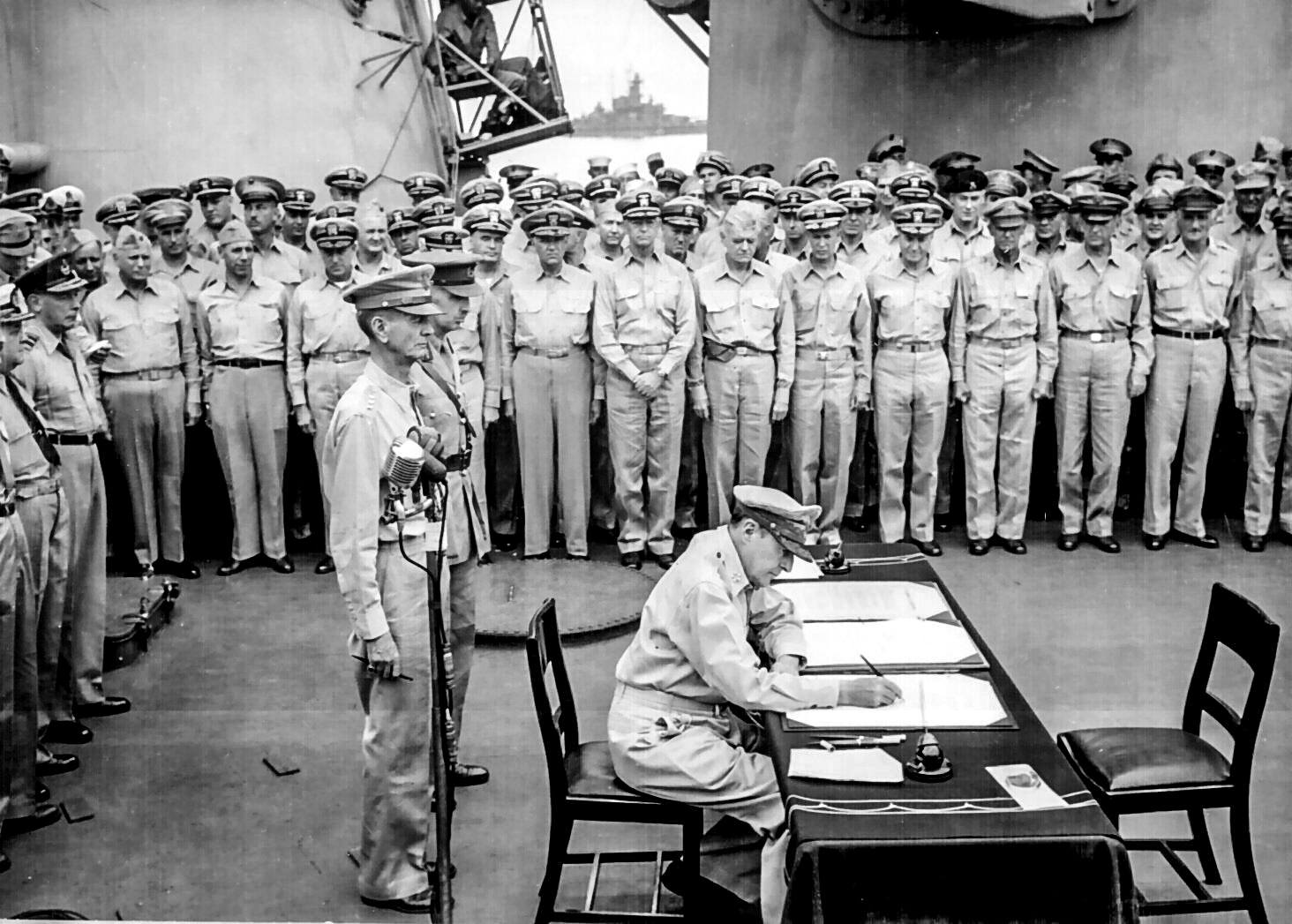 The Last Of The Battleships

The USS Missouri’s construction began in 1940 and she was commissioned into service in June 1944. It is the fourth ship to be given the title “Missouri” (including a Confederate Missouri that was captured by Union forces during the Civil War) and was the last of this type of battleship to be commissioned by the US Navy. When the battleship set sail for the Pacific from New York in 1945 she was armed with nine 16 inch guns, twelve 5 inch guns, eighty 40mm guns, forty-nine 20 mm guns, and multiple .50 cal machine guns mounted on the deck.

The ship, also known as the “Mighty Mo” or “Big Mo”, fought in the battles of Iwo Jima and Okinawa and eventually shelled the Japanese home island. After the atomic bombs were dropped on Hiroshima and Nagasaki the Empire of Japan surrendered to General Douglas MacArthur and Admiral Chester Nimitz on the deck of this battleship in Tokyo Bay on September 7th, 1945. At the close of the proceedings, General MacArthur said, “Let us pray that peace be now restored to the world”. With those words, WWII was over. 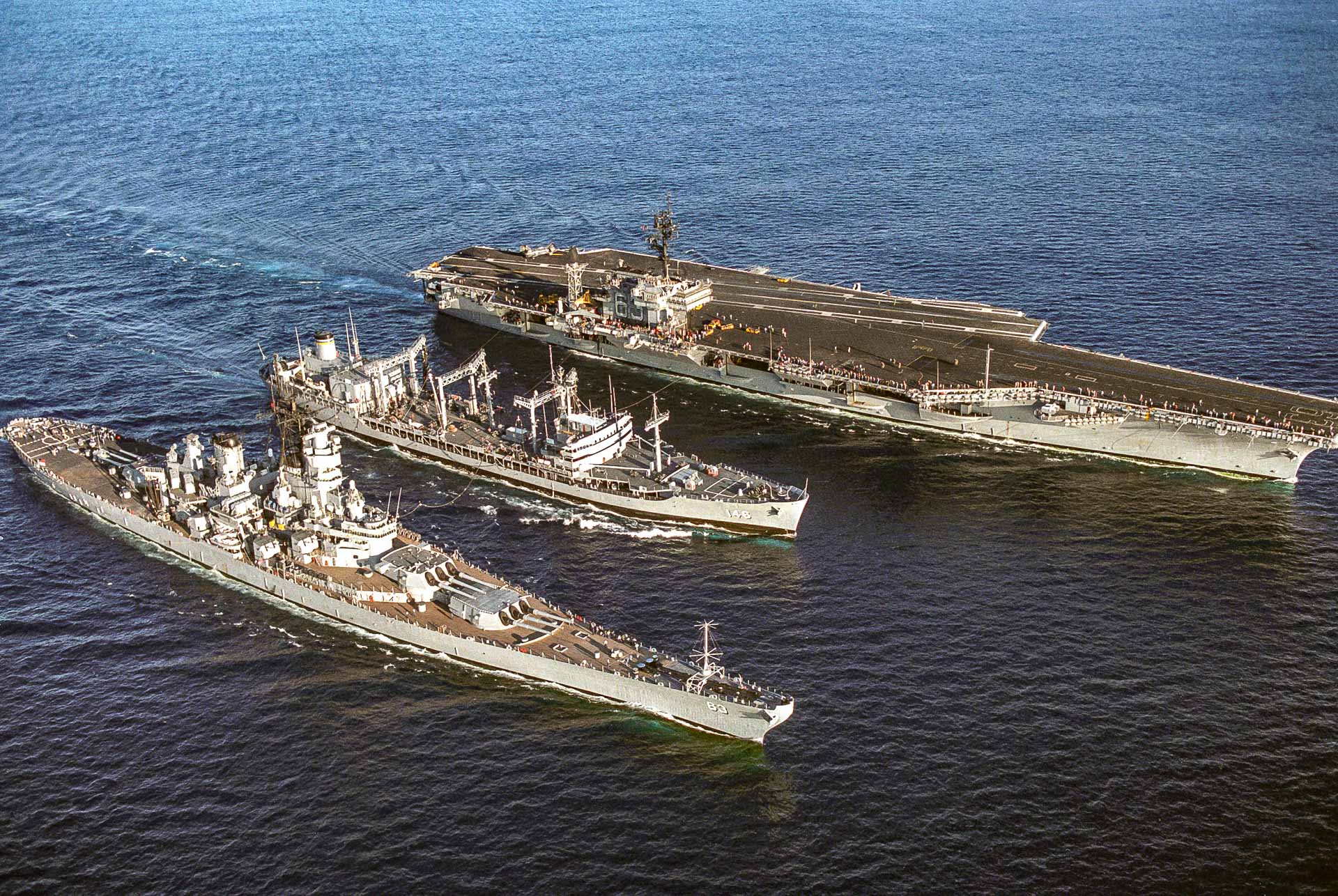 The battleship later fought in the Korean war from 1950 to 1953 and though the ship was decommissioned into the US Reserve Fleet in 1955 she was reactivated and modernized in 1984 to provide fire support during Operation Desert Storm in Kuwait 1991. In 1999 the Battleship Missouri was moved to Pearl Harbor and docked in line with the Arizona, becoming a symbol of the beginning and the end of the U.S. involvement in the Pacific theater during WWII. Today the area on the deck where the surrender took place is commemorated with plaques, photos of the surrender and a display case housing replicas of the surrender documents. 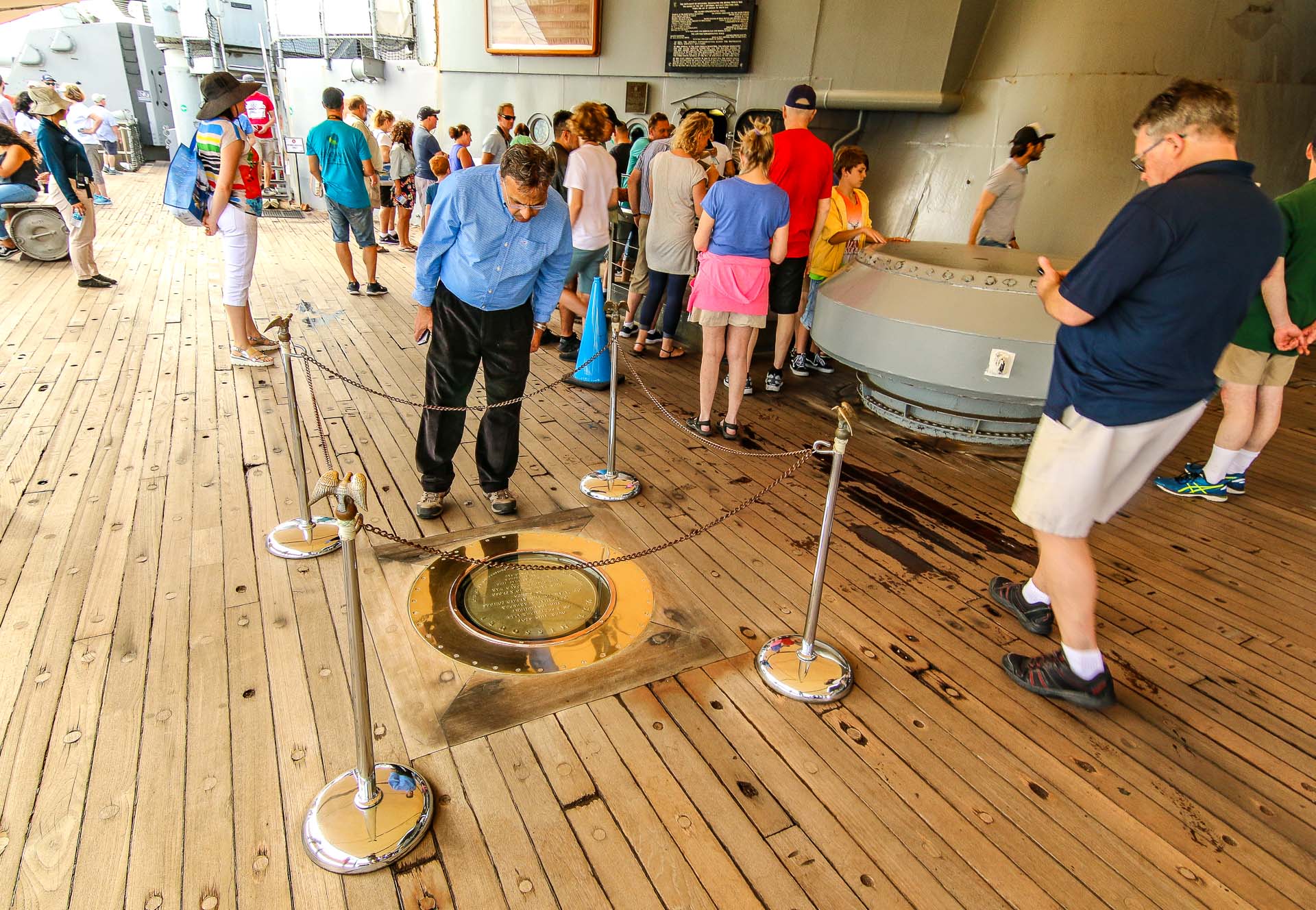 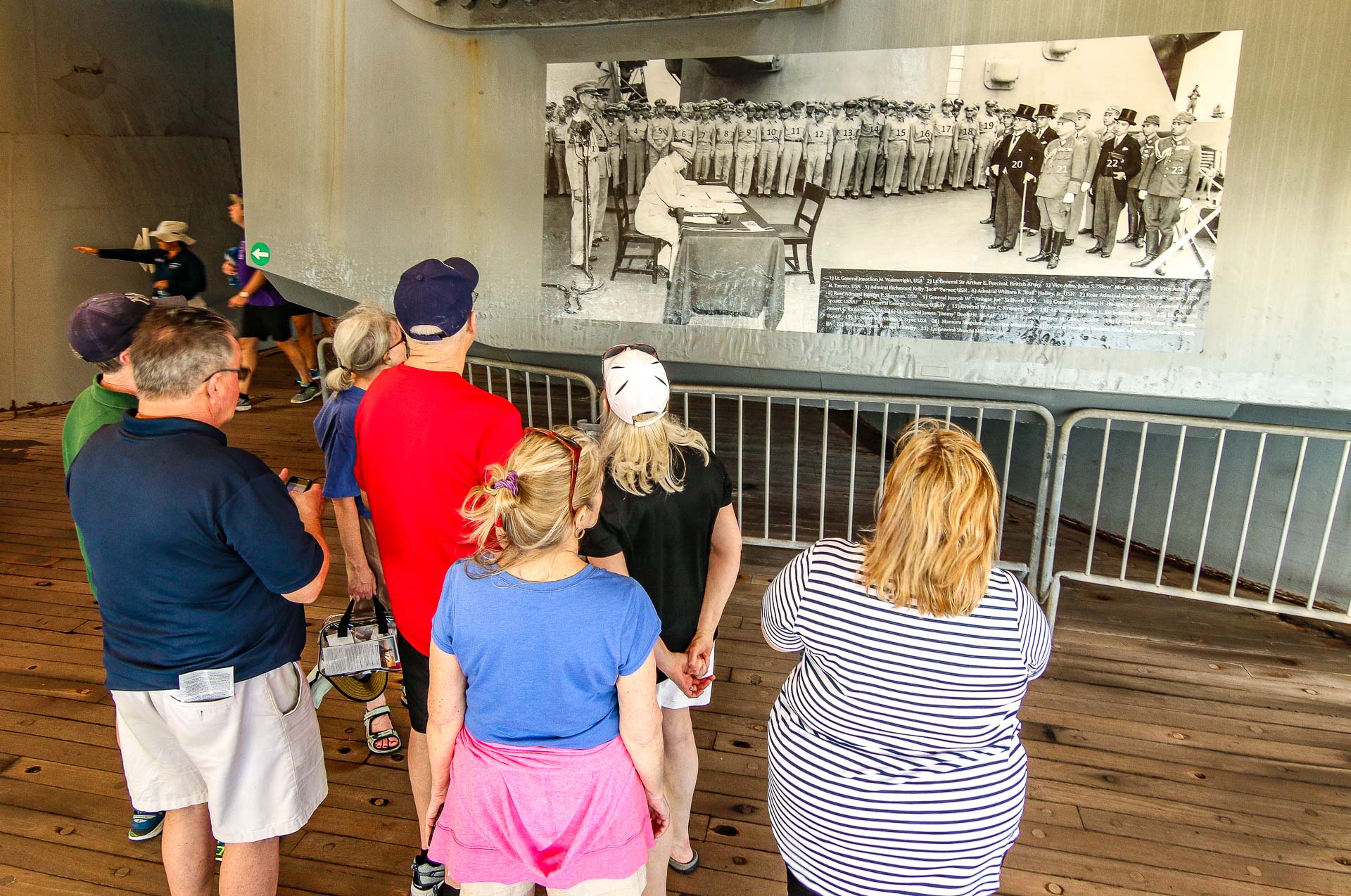 Missouri’s main battery consists of three turrets holding three 16 inch guns (two turrets forward and one aft) for a total of nine barrels. The guns used 1900 pounds of powder that could fire a 2700 lb armor-piercing shell up to 23 miles – three at a time. A well trained crew could fire two rounds per minute per gun.

The ships secondary battery consisted of twelve 5 inch guns in twin turrets (6 turrets total) which fired a 55 lb shell about 10 miles. They were used for ship-to-surface and anti-air defenses and fired 15 rounds per minute per gun.

Air defenses became more and more important as the Missouri mostly escorted aircraft carriers throughout her WWII deployment. Because of this she was fitted with an array of twin and quadruple mounted 20mm and 40mm anti-aircraft guns.

Upgrades were made in 1984 for active duty in the Persian Gulf during Desert Storm. Watch the video to see the mighty battleships firing for the last time. 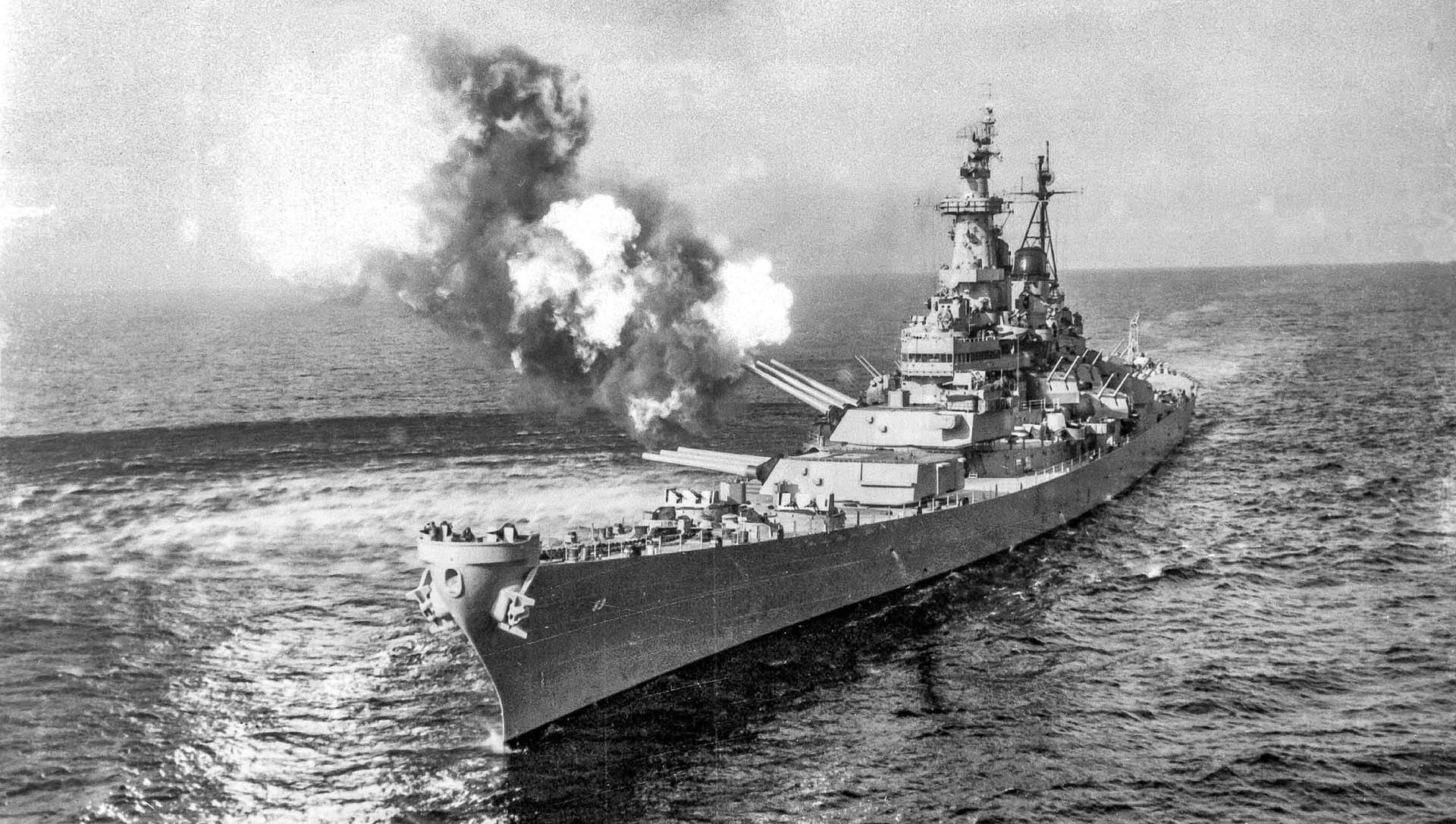 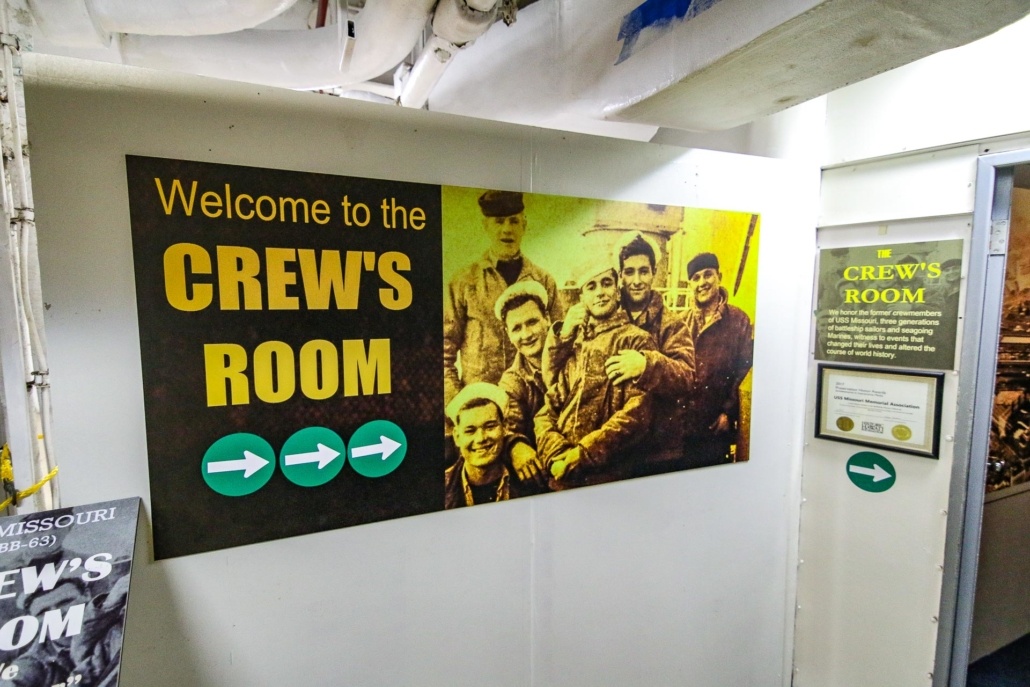 Being on the deck with those towering guns is an impressive sight but entering the ship below the aft gun turret is a step back in time. The lower deck is a museum fitted with items onboard during WWII. Crews quarters, the galley, radio and war rooms with historical plaques, signs and scale models explaining the day to day duties and life at sea with the captain and crew. It’s like a catacomb of steel loaded with historical photos and items from people on both sides of the war in the Pacific. The spaces are tight but surprisingly spiralling and takes a bit of time to walk through the lower deck and exit mid ship. Again it’s not hard to imagine how claustrophobic it would have been to live, work and do battle under fire in this cramped yet expansive ship. 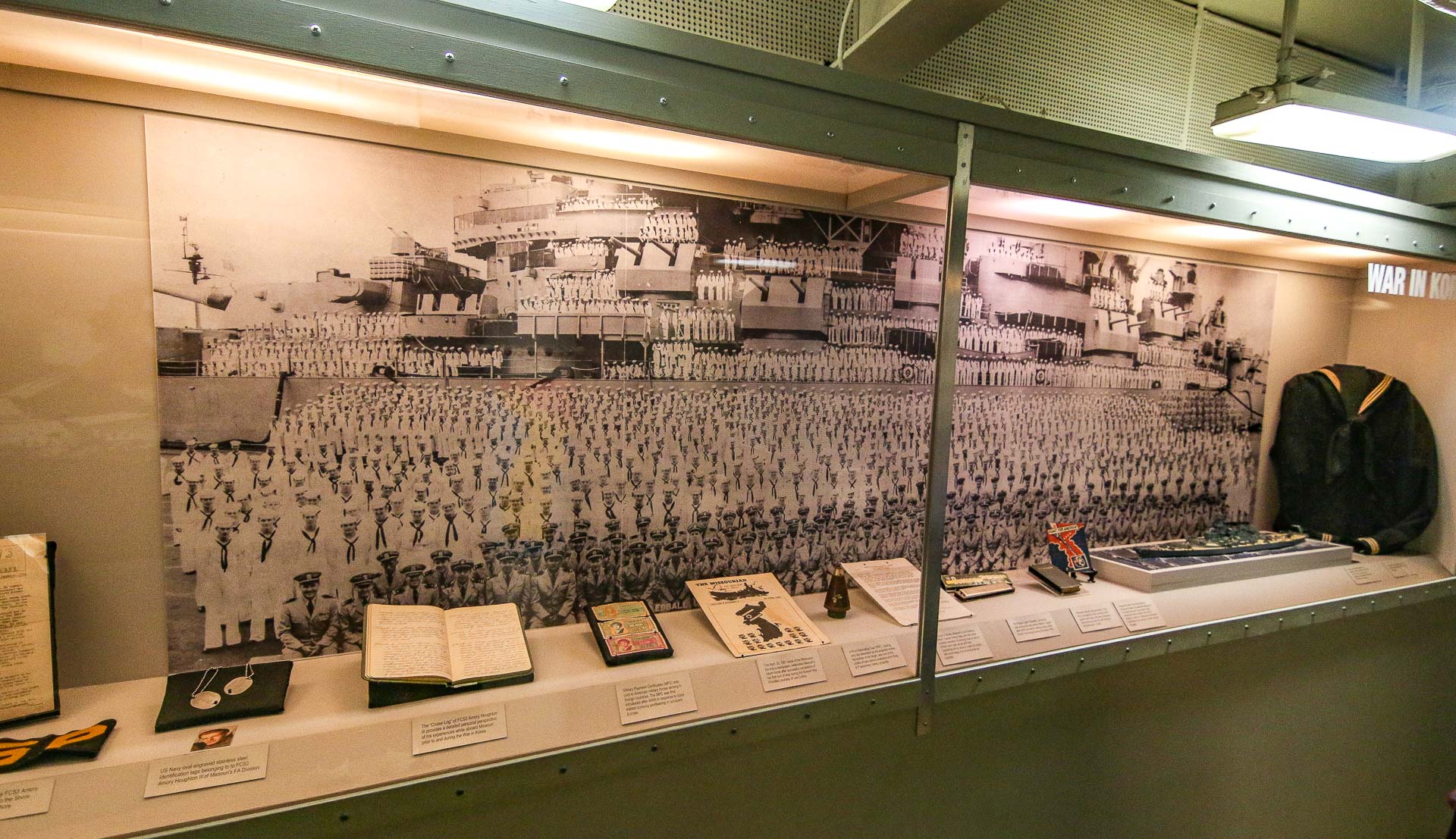 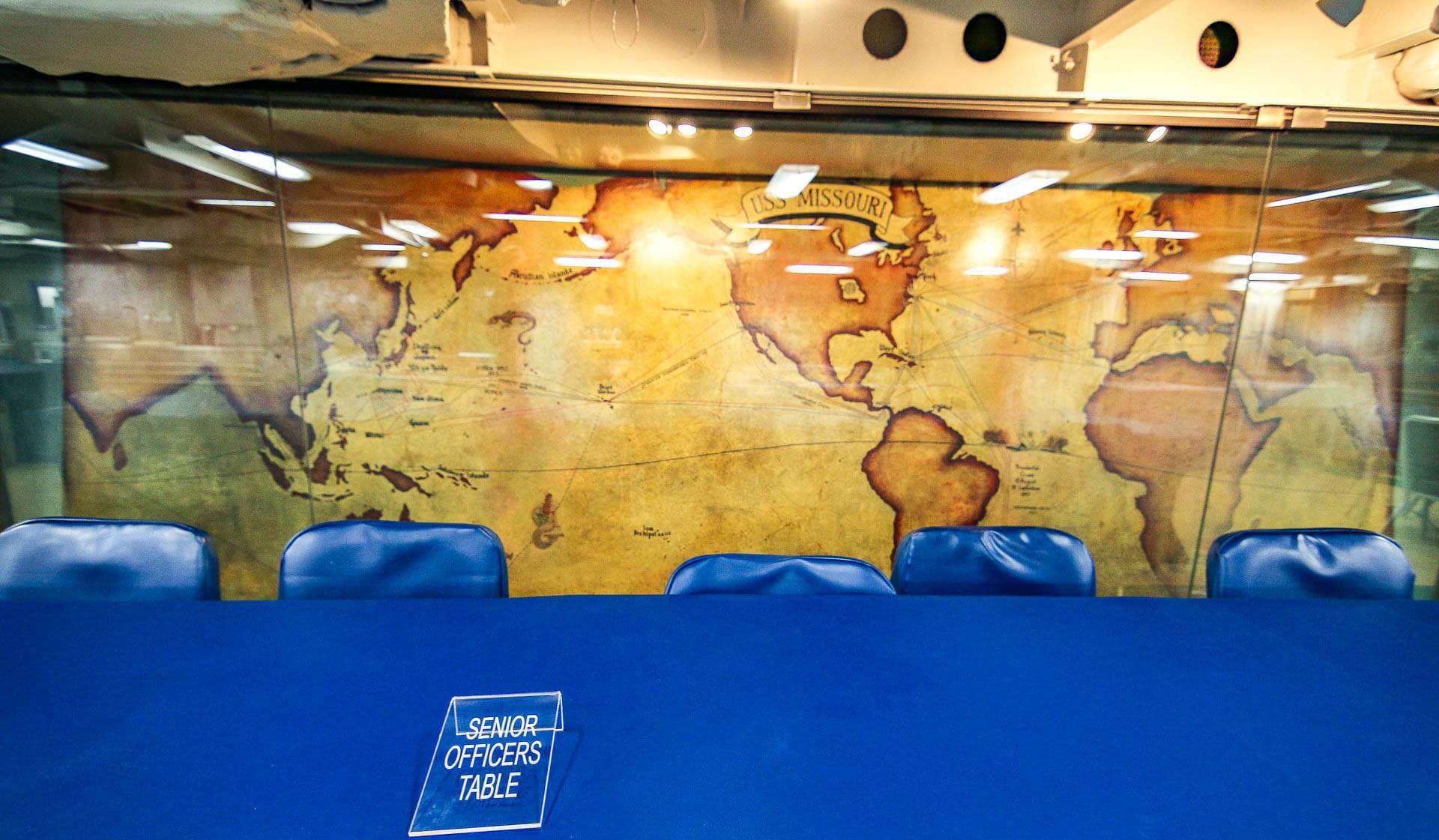 The battleship received a total of 11 battle stars for serving in WWII, Korea, and the Persian Gulf over her 16 years of active duty. Decommissioned in 1992 and donated to the Battleship Missouri Memorial Association in 1998, it was determined the ship should be docked at Pearl Harbor. Initially, the staff were concerned about the large battleship overshadowing the Arizona Memorial. Because of these concerns the ship was placed well back of the Arizona Memorial and facing it, conveying that the Missouri was watching over the remains of the ship’s entombed crew.

Today the ship is a fascinating look into our country at war in the 1940’s and the Navy personnel who fought during WWII. The ship and museum within are a fitting tribute to those who served. It brings together both the beginning of the war with the attack on Pearl Harbor and the end of the war with the signing of the articles of surrender on the USS Missouri!

This awe-inspiring battleship is definitely worth seeing along with the Pacific Aviation Museum on Ford Island, which is the next stop on the bus ride back to the visitor center. 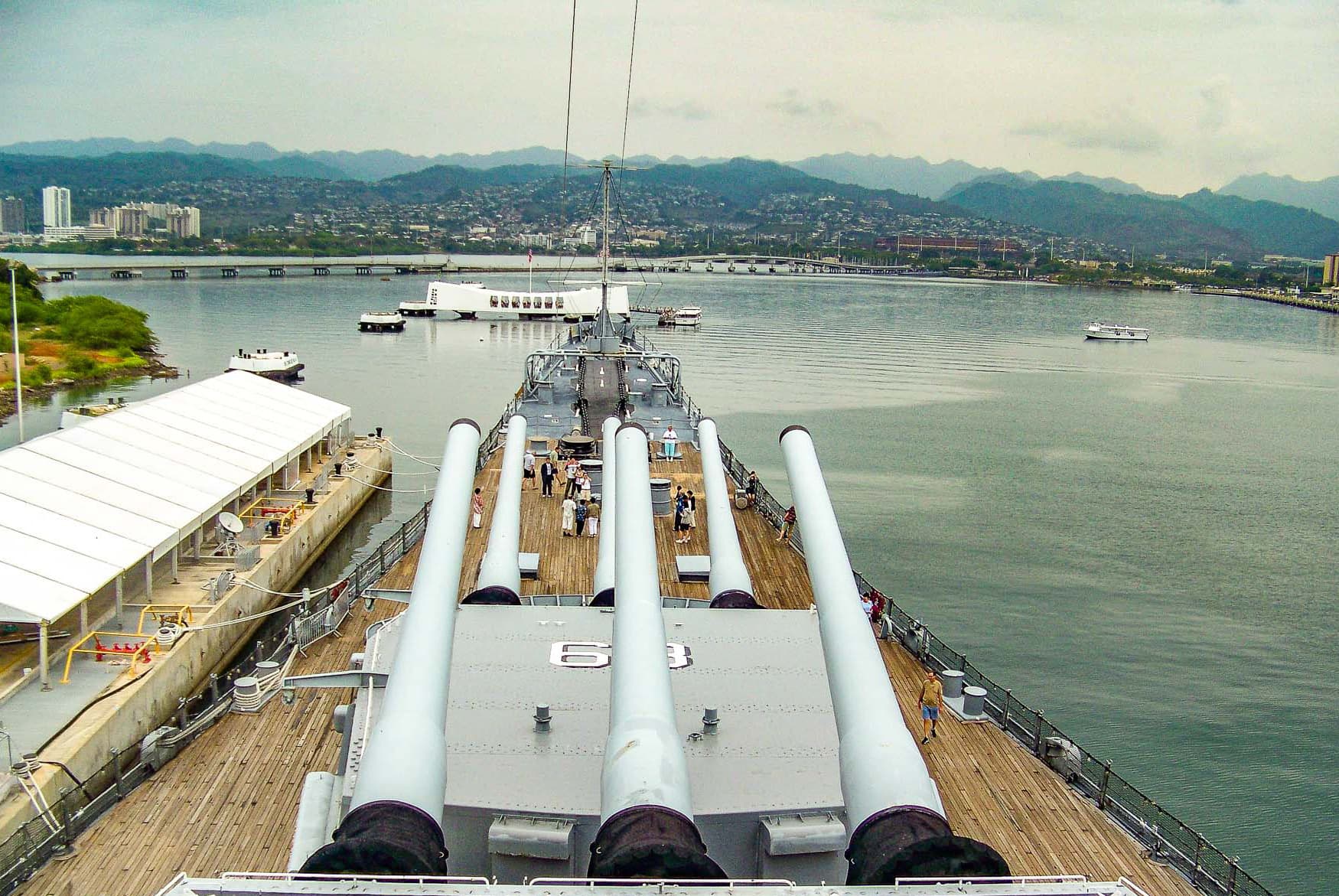 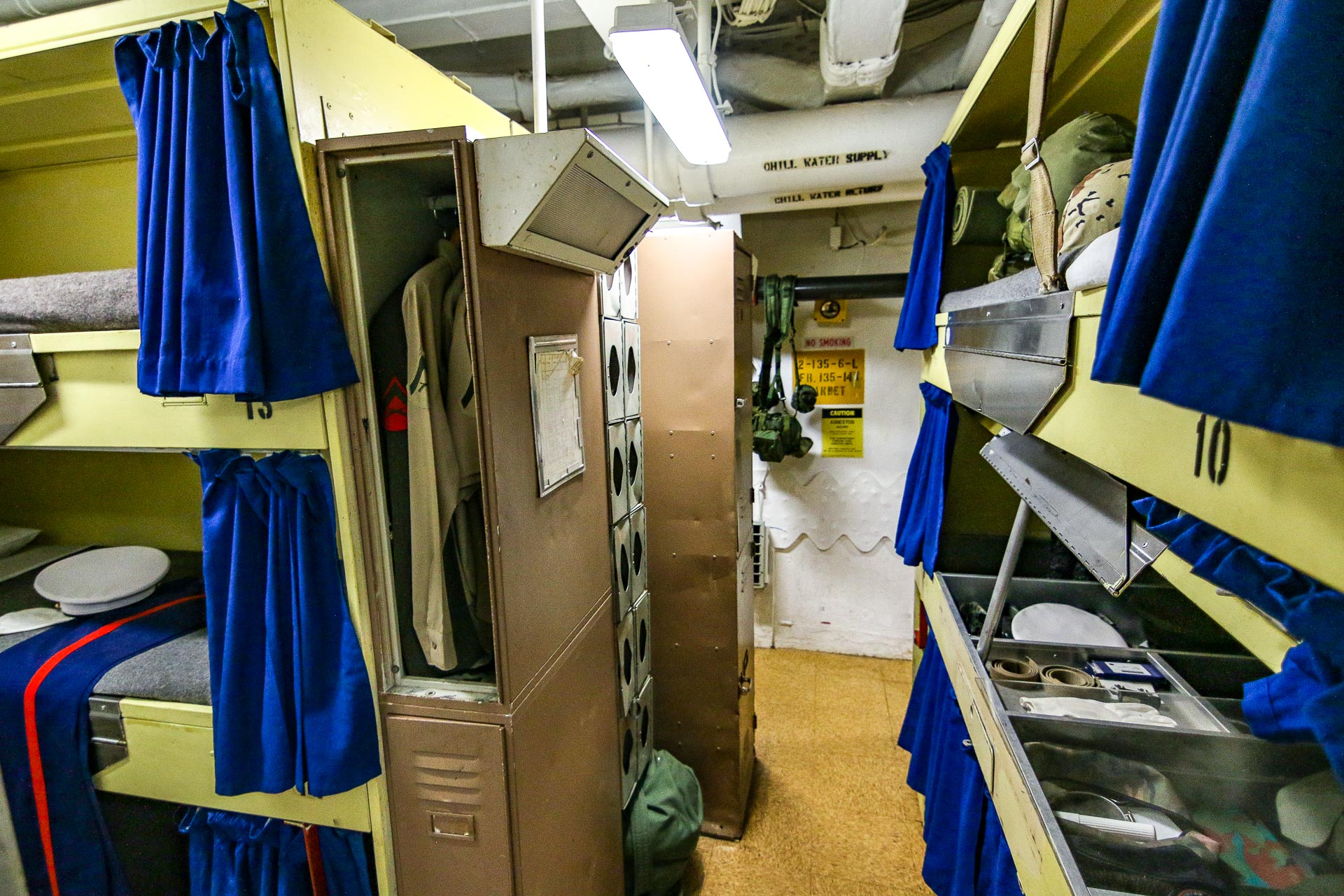 One of the unique things about this floating museum is that local youth groups can experience an overnight encampment aboard the battleship. Students sleep in crew berthing areas, eat Navy-style meals and work together with hands on activities that require communication and teamwork in a historical “life at sea” setting. Must be fun to be a kid in Oahu!

Due to the construction of the Honolulu Rail Transit Project, shuttle times from the Pearl Harbor Visitor Center to the Battleship Missouri Memorial may be delayed. Please allow yourself extra time for this activity as shuttle buses that must be taken to enter an active military base will need to take a different route to accommodate construction in the area.