Fun Facts You Might Not Know About Pearl Harbor

Pearl Harbor is possibly one of the most well-known harbors in the world. There is a rich and important amount of history associated with this area before the Japanese attack. Check out what Kamehameha harvested from it and itʻs original Hawaiian name, or learn about the evidence of the shark god who inhabits itʻs waters. We also touch on the types of ships in Pearl Harbor and some of the sunken ships that still reside in the shallow waters of the harbor.

Learn More From Our Pearl Harbor Guides On Tour!

Why Is It Called Pearl Harbor?

It Was Named That During The Time Of Kamehameha The Great

King Kamehameha had conquered Oahu by 1795 as western traders began to arrive regularly in the islands. The new leader of the Kingdom of Hawaii soon learned that foreigners valued the oyster pearls of the river flowing into the lagoon called Wai Momi, meaning “Waters of Pearl”. Kamehameha had native divers of the area gathering them night and day for trade with the west. It is believed around this time the large lagoon became known as “Pearl Harbor”. By 1818 Kamehameha was given an oyster dredge and the lagoon was soon harvested of nearly all its oysters.

In ancient times the entrance to Pearl Harbor was also known by the Hawaiian name Pu’uloa, meaning “long hill”, named for the straight escarpment that lined the long entrance to the lagoon. Pu’uloa was known to have at least 27 fishponds lining it’s shores and natives had fished, farmed and developed villages for an estimated 600 years. On today’s Ford Island powerful chiefs held council meetings in large hale (thatched buildings) were they elected Oahu’s rulers – the only island in the chain to do so.

The narrow entrance to the lagoon was too shallow for larger western ships to navigate and the lagoon would not be used as a harbor until the late 1870’s when the US Navy dredged it to allow larger ships to enter. Soon the harbor would be set up as a coaling station and repair dock. 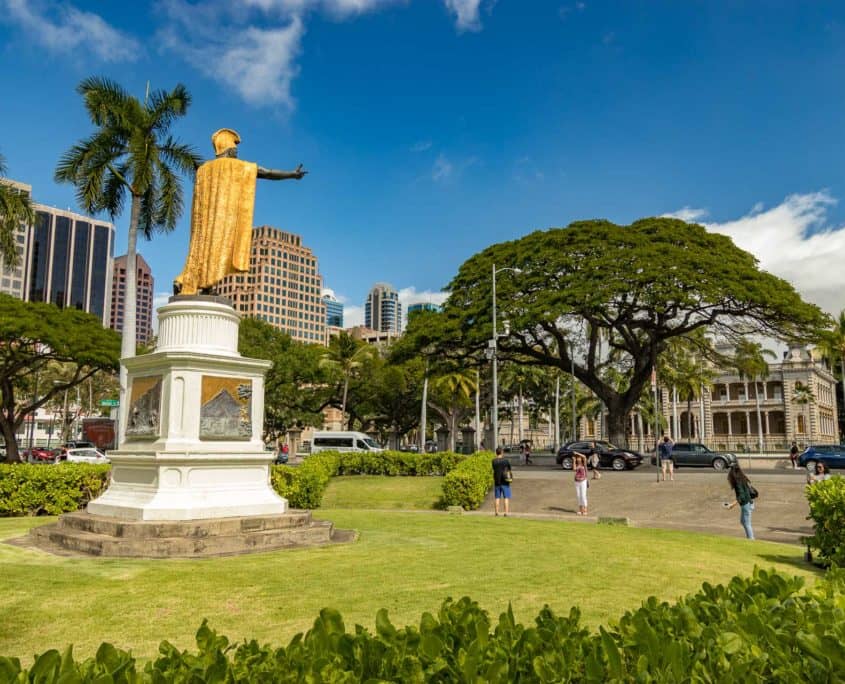 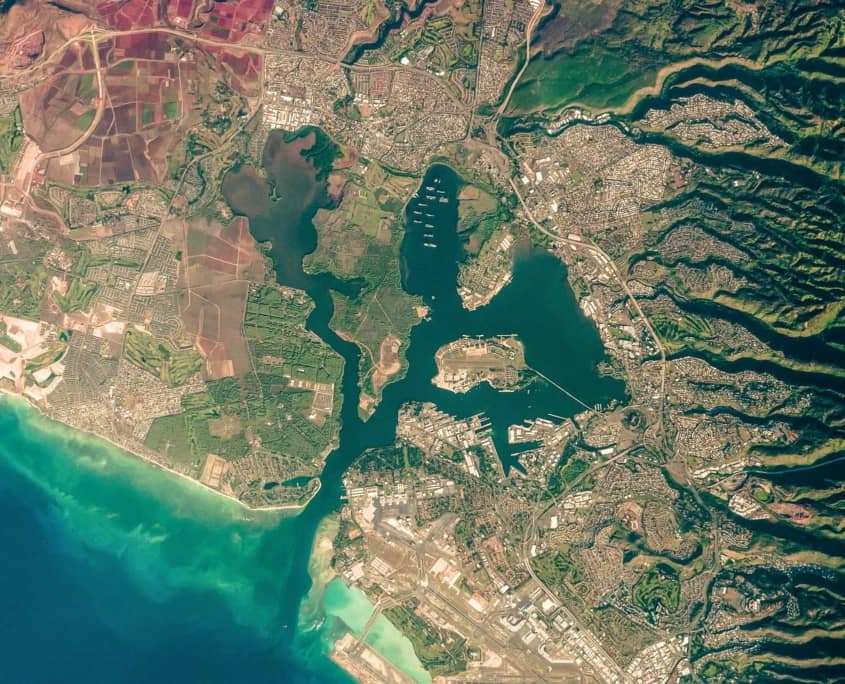 By 1900 Hawaiian culture and legends of Pearl Harbor remained strong and the people warned the Navy that they were invading the home of shark goddess Ka’ahupahau and her son Kahi’uka.

In 1914 workers began building the harborʻs first dry dock. Hawaiians gave warning that they were building the dock over the shark guardians cave. The prediction of doom was ignored but shortly after the docks completion, it collapsed in a torrent of timber and water. The Navy built another dock but this time consulted a Hawaiian priest who offered chants and prayers to the shark gods. After completion workers pumped the water out of the new dry dock and it held. They discovered the body of a 14 ft shark lay in the bottom of the new dock.

In 1887 the harbor’s military history began when the US Navy set up coaling stations in the harbor.

Pearl Harbor became one of the major reason for the overthrow of the Hawaiian monarchy (in 1893) and the kingdoms annexation (in 1898) by the US government. The Spanish American war began that same year in the Philippines and Cuba which ended with the US winning both territories from the Spanish. This allowed the US to establish trade routes in Asia and the Caribbean. Pearl Harbor was used to stage troops for the Philippine invasion and rapid development of dry docks, fueling stations and airfields soon followed.

On December 7th 1941 the Japanese attack on Pearl Harbor also involved the use of midget submarines. One of these subs commanded by Kazuo Sakamaki ran aground on windward Oahu’s Waimanalo beach. He attempted to blow up the sub but the explosives failed and he was soon captured by army personnel. He became the first POW captured by US forces during the war. The midget sub was recovered and eventually toured the US as a promotional piece used to sell war bonds. 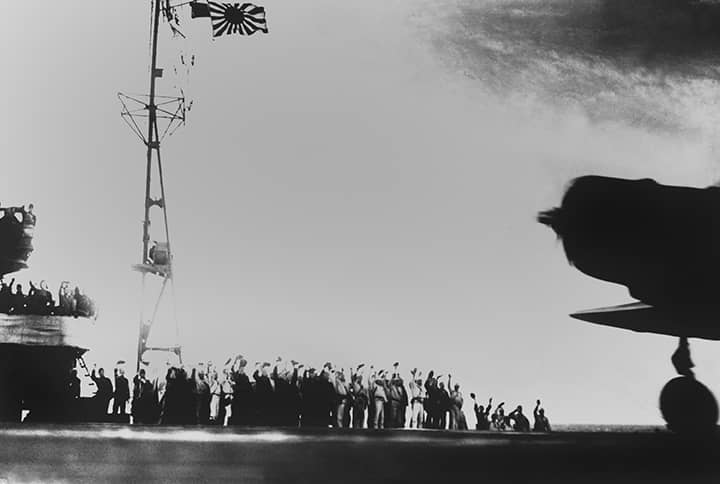 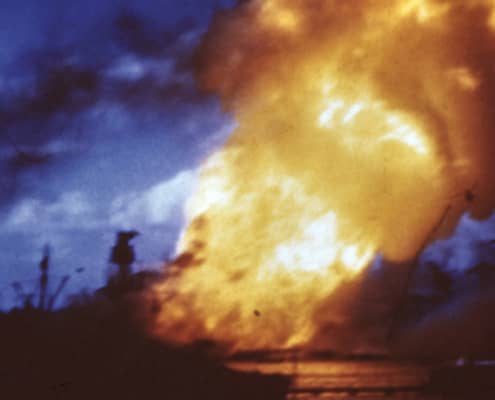 Though devastating as it was the US Navy only permanently lost 2 ships in the attack on Pearl Harbor, the USS Arizona, and the USS Oklahoma. All the other damaged ships were refloated and repaired, many within 6 months. This is because the Japanese failed to bomb the nearby repair facilities and dry docks. They also failed to damage any of the aircraft carriers who were out of port during the raid. The Japanese mistakenly believed battleships would play the main roll in naval combat. It turned out that aircraft at sea would be the main weapon that would lead to the deadly demise of the Japanese Navy.

There were 7 ships that were sunk completely during the attack. All but 3 of them returned to service in 1944. The Arizona & Utah are both Pearl Harbor Memorials. Oklahoma was stripped of useable materials and while being towed to California after the war, took on water and sank 500 miles off Hawaii.

Battleship Facts: The 3 that did not return to service were all battleships. The battleships were the secondary target of the attack after no aircraft carrier was identified. Utah, although it was classified as a battleship, was used for training and target practice only. It was torpedoed by young Japanese pilots after being misidentified. Attacking it was not part of the plan.

Twenty three sets of brothers died in the attack on the USS Arizona. At the time it was common for brothers to serve together. The Arizona actually had 37 sets of brothers aboard, a total of 78 men, with only 15 surviving the attack. This tragic loss to American families would eventually lead to brothers being stationed on different ships and combat units to limit the losses to families back home.

Interesting fact – a sailor aboard the USS Utah had his daughters ashes with him when the ship was sunk, entombing the girl on the ship. Nancy Lyn Wagner was two days old when she died and her father brought her on board with the intention of burying her at sea. He never got the chance as the Japanese torpedoed the ship in the opening minutes of the attack and it capsized at it’s berth. Though most of the crew escaped, 64 men died and are entombed in the wreckage. The wreck remains in the harbor, and in 1972, a memorial was erected near the ship.

In 2003 a memorial service was held in the babyʻs honor at the site of the sunken ship. 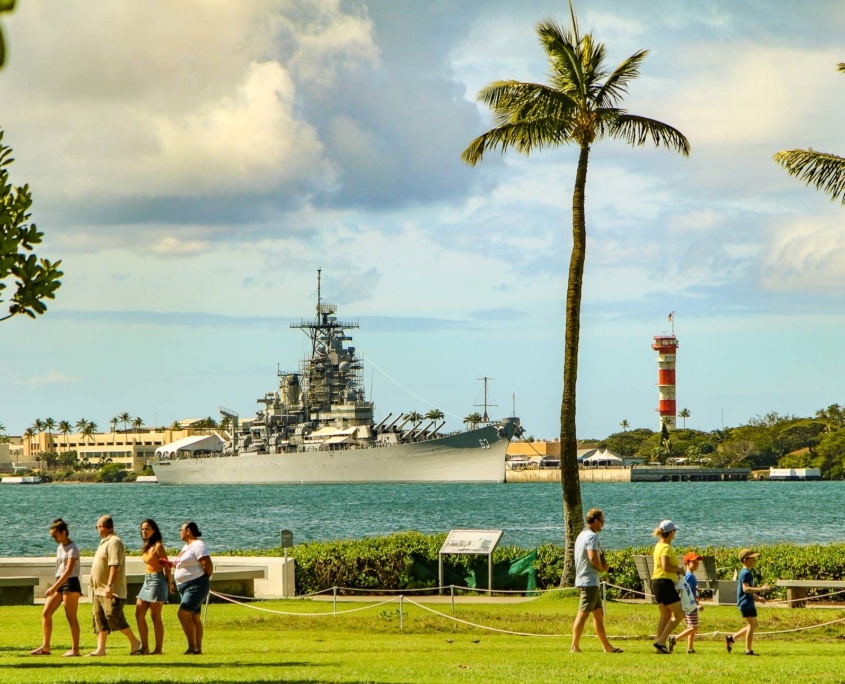 The average depth of the harbor is only 45 feet deep or just over 13 meters. When dropped, a torpedo will drop to a depth of 100 feet before rising so the make an attack successful, they had to add wooden fins to the torpedos and practice for almost a year to learn how to launch attacks on the ships in the harbor. 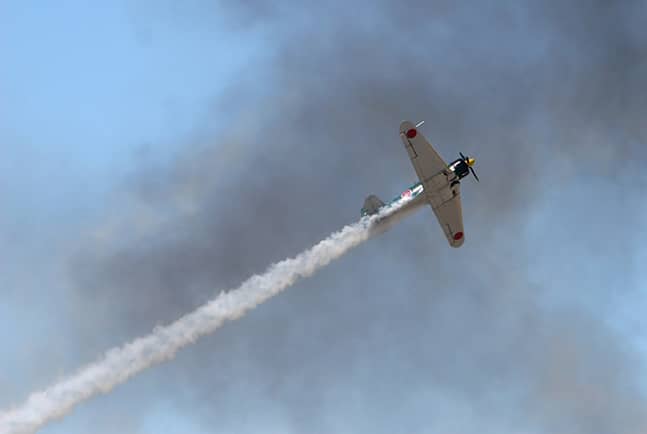 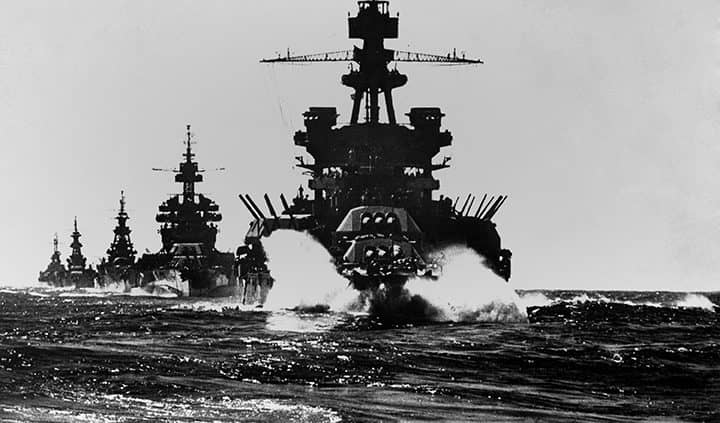 Few know that the second attack on Pearl Harbor by the Japanese occurred on March 4th 1942 just 3 months after the initial devastating attack. Called Operation K, two Japanese flying boats flew across the Pacific from Japan where they were refueled by submarines before flying to Oahu. Each plane carried four 550 lbs bombs.

The mission was to reconnaissance Pearl Harbor and bomb the repair and salvage operations. The Japanese originally planned to use five Kawanishi H8K long range boat planes but only two were available at the time of the mission. The raid would be one of the longest bombing missions flown in the war.

They approached the islands around 1 am when radar stations on Kauai spotted the planes. P-40 Warhawk fighters were scrambled to intercept but heavy cloud cover prevented them from finding the Japanese planes flying at 15,000 ft. On Oahu, an island-wide blackout meant to deter air raids and the same thick cloud cover prevented the two planes from identifying Honolulu and Pearl Harbor at night.

One plane dropped its bombs in the ocean near the entrance to Pearl Harbor and the other dropped bombs near President Theodore Roosevelt High School on the slopes of Tantalus Peak north of Honolulu. No one was injured and damage was minimal with a few broken windows at the school. Both the US Army and US Navy blamed each other for the explosions, each accusing the other of jettisoning munitions over Tantalus Peak.

The Japanese attempted the same mission again with a single plane on March 10th 1942 but it was shot down by Navy fighters over Midway Atoll.

Attracting over 1 million visitors a year the USS Arizona Memorial was built over the sunken hull of the sunken battleship. It is perhaps the most well-known memorial of World War II. It’s construction was finished in 1962 at a cost of nearly $500,000 (about $4.2 million in today’s dollars) – all by public and private donations as decreed by then-President Dwight Eisenhower.

Elvis Presley had just finished a two-year stint in the Army. He loved Hawaii and in 1961 Elvis Presley performed a benefit concert at Pearl Harbor for the Memorial that raised nearly $65,000.

Survivors of the attack on the USS Arizona can choose to have their ashes scattered or entombed on the ship at the memorial. 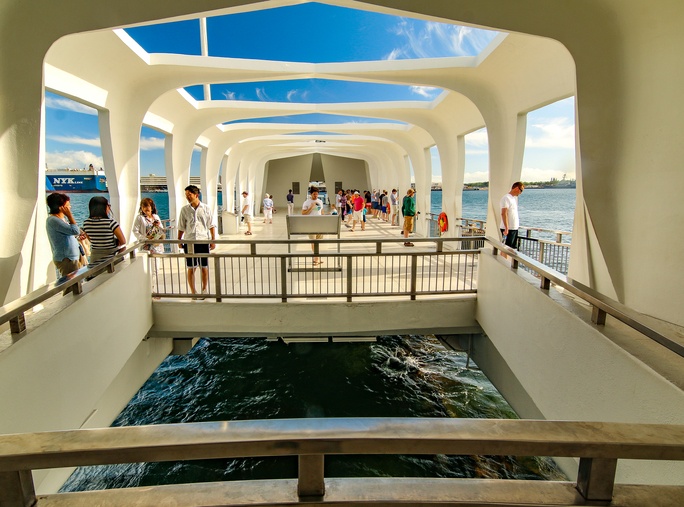 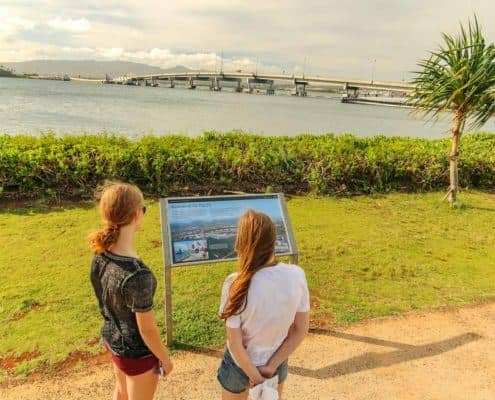 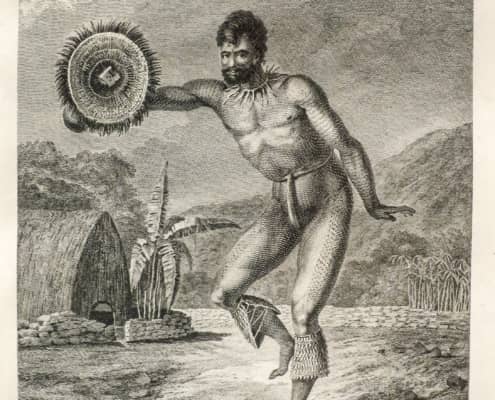 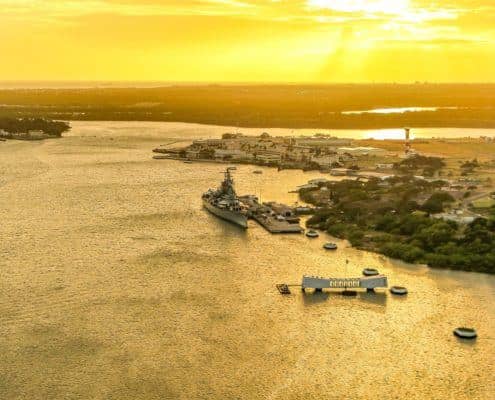 Having a great vacation is important to us too. We are here to offer you top quality service and support everyday.

All flights to Pearl Harbor from Maui, Kauai, and Big Island are included.

We are here to make your visit to Pearl Harbor easy. Our low-fee cancellation policy is good till 48-hours before tour starts (except tours with flights).

We encourage you to book now as there is 100% refund policy for all tours starting on Oahu.
(Tours with flights must purchase trip insurance at checkout to qualify.)
This site uses cookies. By continuing to browse the site, you are agreeing to our use of cookies.

We may request cookies to be set on your device. We use cookies to let us know when you visit our websites, how you interact with us, to enrich your user experience, and to customize your relationship with our website.

Click on the different category headings to find out more. You can also change some of your preferences. Note that blocking some types of cookies may impact your experience on our websites and the services we are able to offer.

Because these cookies are strictly necessary to deliver the website, refuseing them will have impact how our site functions. You always can block or delete cookies by changing your browser settings and force blocking all cookies on this website. But this will always prompt you to accept/refuse cookies when revisiting our site.